Review: ‘You Should Have Left’ a creepy thriller

If this movie has a central theme that runs through it, it’s nightmares. The characters rent a house where nothing is as it seems. And you find that doesn’t just apply to the house.

“Violent or upsetting dreams are merely the minds attempt to release the pressures of our daily thoughts and fears,” says the narrator of a meditation relaxation tape. 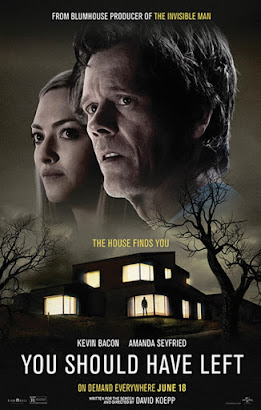 Theo (Kevin Bacon) is infamous for a crime he was found not guilty of and his wife, Susanna (Amanda Seyfried) is an actress. They decide to get away with their daughter, Ella (Avery Tiiu Essex) for a little while and rent a house in picturesque Wales. The house is enormous and is very nice inside and out.

Right from the start, you notice something is more than a little off about this house. Ella is the first to notice it when she’s playing shadow puppets.

On a walk one day, Ella asks Susanna ‘why people hate daddy so much?’ Before they left, Theo had mentioned to Susanna that he had been recognized when he visited her set. Susanna explains to Ella that before she met Theo he was married, and his wife died. Now, a jury did find him innocent, but there are people who think he had something to do with it.

More house-related weird things happen when Theo goes into town to buy groceries. The clerk asks if anything has happened in the house and if he’s met Stetler yet. And when Theo leaves, a woman is waiting for him at his car and gives warnings about the house. He brushes this off as just weird interactions.

Theo suspects Susanna of cheating and goes through her devices while she’s taking a bath. He finds nothing.

Theo is constantly noticing that doors seem to appear in places where they weren’t and when he tries to show Susanna, they are not there (of course). The house seems to be one big maze from time to time and Theo has trouble deciphering the dreamworld from the real world. This is most evident when he finds himself trapped in the many hallways of the house, looking for Ella. This comprises a very intense few scenes, with Theo even cutting himself to see if he’s asleep or not.

After talking it over, they decide to leave the house. Something stops all three of them from going.

What’s the deal with the house?

Who is Stetler? What role does he play?

Are the three of them able to get away from the house?

I’ve seen a lot of movies about haunted houses, but this isn’t one. This house has its own issues that have nothing to do with ghosts. This movie kept me interested through most of it and there are many details about the house that just don’t make sense and had me wanting to know more and more. It’s not particularly scary, but there are a few extreme scenes. It has some mild sex (no nudity) and language. Stetler creeped me out. The actor who played him did a fantastic job at making the viewer feel uneasy with what they were seeing. This is not an edge-of-your-seat thriller, but it’s a decent rental that will have you guessing why the house is doing what it’s doing to Theo and Susanna until the end. Two creepy hidden doors up.  <