The Discovery Channel’s annual Shark Week will happen this year and is right around the corner. So, in preparation, I chose the sequel to 47 Meters Down on Amazon Prime as something to hold me over until Shark Week is here.

If you haven’t seen the first 47 Meters Down – not to worry. The sequel is pretty much exactly the same premise, people go into the water and must escape sharks, except with a larger cast. Unlike Shark Week, don’t expect to learn anything from this movie, except that sharks don’t like big speeches about how you’re going to outsmart them. 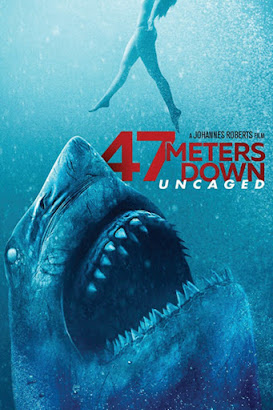 Mimi (Sophie Nelisse) and Sasha (Corinne Foxx) are step-sisters, who aren’t particularly close. Mimi is being bullied at school and Sasha doesn’t really stick up for her. When Mimi’s dad (John Corbett), a cave diver, gets them tickets to a shark tour, Mimi and Sasha skip the tour and go cave diving with friends (Sistine Rose Stallone and Brianne Tju) instead. Everything is going well, and everyone is having fun when out of nowhere, chaos ensues. The group gets separated.

Fortunately, they run into a friend, Ben (Davi Santos), but he’s no help. The group soon discovers they are not alone. More chaos happens around them and part of the cave collapses and the girls have to find a way out. In trying to do so, they only get more lost and oxygen tanks are starting to run out. Mimi knows her dad is working close to where they are and breaks off to try to find him. She eventually finds him. He helps the girls by leading them to a harness that will pull them safely to land. If only it were that easy. The harness gives way and falls into the water. Now, they are right back where they started.

Will they all escape?

Is there enough oxygen to do so?

How many sharks are they surrounded by?

While this film dragged a little and didn’t have my heart racing with excitement (or terror), I still enjoyed it. It had a few jump scares. That being said, it’s not as amusing as one of the many ‘Sharknados,’ but those are big fins to fill.

Parts of ’47 Meters Down Uncaged’ are predictable and in other parts it’s hard to see. I found it was sometimes hard to keep track of where each of the girls were, especially in the scenes where it’s much darker. There is a bit of blood in the water, as the sharks do kill a person (or maybe two), so if you’re squeamish, heads up. But I didn’t find it overly gory.

If you’re looking for a cheesy shark movie, this meets the criteria.  Two fins up – above the water, so look out. <