Earlier this month was the anniversary of the death of actor, comedian and all-around bringer of joy, Robin Williams. This documentary has friends, family and those who knew him talk about him. There are clips and interviews as well as footage from Williams’ stand up specials, USO tours, movies, TV and more. 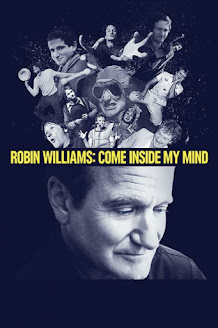 I have been a fan of Robin Williams from the moment I first saw – actually, it was when I heard him on the big screen. I was 7 or 8 and I saw 1992’s “Aladdin” in the theater. The genie made me laugh. I remember the impressions he did and the way his voice changed to match his impression; like Jack Nicholson for example. I’ll be honest, at seven or eight you don’t know all the people he impersonated as the genie, but it made me laugh and that’s where it counted. From that moment, Robin Williams was on my radar.

A year later, I would see Williams when my parents took my brother, a friend of mine and myself to “Mrs. Doubtfire.” I remember trying to mimic the impressions he did. That movie remains a favorite of mine to this day.

Williams has always been a Tour de Force of energy and comedy from his late night appearances to when he played the character Mork on ”Mork and Mindy.” A fourth camera had to be added to follow him because three were not enough.

The documentary opens with a scene from Williams’ appearance on “Inside the Actor’s Studio” with James Lipton. This appearance is a good example of how fast he thought and how energetic he was.

Williams was interested in theater early on, and later gravitated toward improvisation and then stand up comedy. It is said later in the documentary, that he was more comfortable on stage than off. He attended The Juilliard School, but left during his junior year. It was after this that he got in to improvisational comedy. Standup soon followed and a former writer made the observation that “being a writer for Robin’s stand up is like being a pinch hitter for Barry Bonds – you’re not necessarily needed.”

Once the success of “Mork & Mindy” hit, it hit big. Williams got into drugs, but after the death of his friend and actor John Belushi, Williams got clean. He married, had a child and began making movies. It was around this time that he made classics like “Good Morning Vietnam,” or “Moscow on the Hudson” and “The Best of Times.”

He later got divorced and did theater and made even more movies like “Awakenings,” or “The Fisher King” and “Hook” (just to name a few). He continued doing stand up and remarried and had more children.

His oldest son Zak, said “his pathos was seeking to entertain and please.”

I highly recommend this documentary. I’ll warn you about the last 10 minutes, it gets rough. I knew what was coming, but there was a part of me hoping for a different ending. There is some language and sexual humor, but overall, it’s the story of man who just wanted to make people laugh - and share his spark of madness with the world. As Williams said, you’re only given a little spark of madness. You mustn’t lose it. <