It’s the early 20th century. You work at a pickle factory. One day, you fall in a vat of pickle brine and are preserved for 100 years.

When you awaken, the world has completely changed and you know no one, except for your great grandson. Based on Simon Rich’s comic novella ‘Sell Out,’ this movie tells the story of Herschel Greenbaum (Seth Rogen) and Ben Greenbaum (also Rogen).

Herschel and his wife Sarah (Sarah Snook) moved to America in the early 20th century where he worked in a pickle factory. After he fell in a vat of brine, and woke up in the 21st century, he feels very scared and alone. His wife is dead, his child is dead, and he doesn’t know anybody. 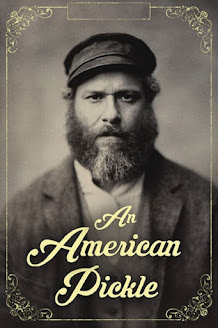 He meets his great grandson, Ben Greenbaum who is very welcoming and excited to meet Herschel. Ben grants a dream of Herschel’s almost immediately after meeting him.

Herschel is amazed and overwhelmed by the current world. He is amazed that Ben owns 25 pairs of socks. As would be expected, Herschel is confused by some aspects of this ‘new world.’

Ben shows Herschel a photo album with pictures of his grandson and son. Ben’s parents have died, and Ben doesn’t like to talk about it. The two go to find Ben’s parents’ grave.

Herschel finds Sarah’s grave which is now under an overpass and in front of a giant billboard. This upsets Herschel and he gets in a fight with a construction worker and he and Ben go to jail. They are quickly released, but this upsets Ben as he had to pay bail. It then has a negative effect on an app Ben was developing. Ben has had it with Herschel and kicks him out.

Herschel begins selling pickles with found ingredients. They are a hit and his pickle business takes off. Ben sabotages it. Herschel is able to turn his business around and returns to Ben’s apartment to help Ben. Ben sabotages Herschel at least twice more. Herschel makes some bigoted remarks and people turn on him. He goes to Ben for help, unaware that Ben set him up all along.

What happens to Herschel? And Ben? Do they ever find common ground?

This is not your typical Seth Rogen movie. The movie follows the novella fairly closely but includes some things the novella doesn’t and vice-versa. It starts out very heartfelt but takes a turn.

While Ben’s anger toward Herschel for landing them in jail is justified, Ben is vindictive for a lot of the movie. Herschel does some things that aren’t great, and he does say some things that are not politically correct in both the film and the novella. Ben started off very welcoming and turned on Herschel pretty fast.

While this movie is billed as a comedy, I didn’t find it particularly funny. It’s funny in parts, but you won’t be laughing for 90 minutes - or even 50.

It’s still an ok movie and if you’re interested in seeing it, I say go for it. I give it one pickle up and one pickle down. <