TV Review: Little Fires Everywhere Will Draw You In

Based on Celeste Ng’s 2017 novel, this Hulu mini-series is set in Shaker Heights, Ohio in the 1990s, but has a familiar feel to current day.

The series follows Elena Richardson (Reese Witherspoon) and Mia Warren (Kerry Washington). Elena is an affluent, controlling mother of four who works part-time for the local newspaper. Mia is a single mother and artist who works multiple jobs and travels from town to town as she looks for inspiration for her art. The series follows the lives of these women and their children as well as a custody battle for a baby that was left at a fire station by Bebe Chow (Lu Huang) a friend of Mia’s; the couple who adopted the child and are friends with Elena. This causes a lot of the tension between Mia and Elena. 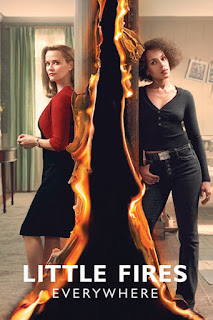 Episode one begins with a fire. Elena stands and watches her home become completely engulfed in flames. A look of absolute sadness permeates her face. The cause and reason for the fire will present itself at the end of the season – it’s an interesting twist. Elena and Mia meet because Elena sees Mia and her daughter, Pearl (Lexi Underwood) sleeping in their car and calls the police. Elena then rents Mia an apartment.

Throughout the series you learn the backstories of many of the characters and there is teenage drama, sex, and one daughter who makes a difficult life choice. There is a lot of interaction between the Pearl and Elena’s kids and everyone harbors their own secrets and lies. I was easily drawn into the character’s storylines and problems and felt the acting was well done and kept me captivated.

Race and privilege play a part in this series. Elena and Mia are from two different worlds and have completely different experiences. Early in the series, Elena tells her children that she and their father worked hard to have their kids avoid hardship. And later in the series, Elena’s husband Bill (Joshua Jackson), tells their youngest Isabelle (Megan Stott) she has no idea what they’ve had to do to live this life. Early on, Elena seems ignorant because see she doesn’t think about the things Mia thinks about. But later on, you see real malice in Elena’s mindset.

I also saw class struggle. A tale of the ‘have’ and ‘have nots.’ Mia and Elena butt heads a lot; for various reasons, and at one point Mia turns to Elena and tells her “you didn’t make good choices – you had good choices.” That comment was eye opening. I never saw it like that.

Kerry Washington is fantastic and made me see things from a different perspective. Reese Witherspoon also does a terrific job. I grew to really dislike her character toward the end.

This was a powerful series that had me interested from episode one. I highly recommend it; very entertaining and well done.<