Nexflix’s ‘The Night Clerk’ will leave you unsettled

Bart (Tye Sheridan) is an intelligent young man with Aspergers who works at a hotel as the night clerk. He lives with his mom (Helen Hunt) after his father has died. Bart has trouble with social interactions and cues, so he watches guests in the hotel to learn more about how to socially interact.

Late one night, a woman checks in. Bart begins to watch her through his monitors, even after his shift has ended. When trouble arises, Bart returns to the hotel to find her dead. He enters her room and begins tampering with multiple devices. Another employee of the hotel finds him in her room, which makes Bart the prime suspect. Detective Espada (John Leguizamo) tries questioning Bart but doesn’t make much progress. 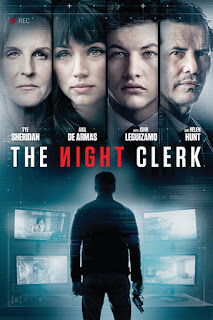 A few nights later, Andrea Rivera (Ana de Armas) checks in and Bart becomes taken with her. They begin talking and Andrea tells Bart that her brother had Aspergers. Bart does admit to her he watches people to work on learning social interaction, but he’s not fully truthful about where he does this.
Meanwhile, Detective Espada continues his investigation.

Bart watches Andrea in her room and they later spend time together by the pool, getting to know each other and even share a kiss. Here, you learn a little more about Andrea. Afterwards, Bart goes out and buys new clothes, gets a new haircut and buys a car to attract Andrea’s attention, but when he shows up and calls her room, she is with another man.

Later on, the police raid Bart’s home, taking his computers and hard drives. This makes his mom very upset and worried. Detective Espada continues to pressure Bart. And Bart continues to spy on Andrea. Andrea stops by Bart’s home looking for him and apologizes to him. What for?

Bart notices a man attacking Andrea and goes down to stop it. It’s here that Bart comes clean about his voyeurism. However, Andrea has a secret, too.

What will Detective Espada find?

Will happens to Bart? Did he have anything to do with that woman’s murder?
And what about Andrea?

When this was added to Netflix, I jumped at the chance to watch it because it looked interesting. This was an unsettling movie for many reasons. The idea that someone could be watching you in your hotel room is very real; that could easily happen and probably has happened. Even if the reasoning is innocent, it’s still unsettling. This movie starts out fairly well-paced but drags a little in the middle. And the end, for me, was a back and forth of ‘what? Did what I think happen, really happen?’ I wanted more from the ending – a lot more. There were questions I wanted answered. I would still recommend it, it’s just not the best thriller/crime mystery I’ve seen. <