Movie Review: SCOOB! introduces Shaggy and his friends to a new generation

It’s an origin story, kind of. One with a modern twist. A new generation of fans are introduced to Scooby and the gang and will love their goofy humor and hijinks in this sweet and funny movie.

We meet the talking pooch while he’s being chased by the police after stealing a large block of liverwurst. A sad, lonely, young Shaggy (not his actual name) is listening to a podcast when it tells him he needs friends and should put himself out there. Moments after hearing this he meets an unnamed dog with a lot of liverwurst. When the police catch up to the two, he asks if the dog is Shaggy’s and what his name is. Shaggy names him there on the spot and a lifelong friendship is made. 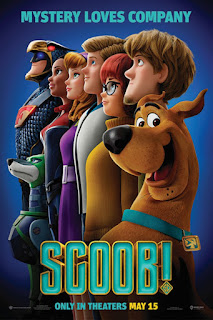 It’s Halloween. Scooby and Shaggy go trick or treating. Bullies grab Shaggy’s candy and toss it in the old haunted Rigby house. Just as Shaggy and Scooby feel all is lost, they meet younger versions of the rest of the gang: Velma, Fred and Daphne. The group decide to go after the candy, but things don’t go as planned. The end of this particular scene brings back a well-known line uttered by bad guys.

Fast forward several years and the group sits around a diner table and discusses ways to expand their mystery solving business, ‘Mystery Inc.’ Shaggy and Scooby break off from the group and go bowling. It’s here that things get weird; and then they get weirder. Shaggy and Scooby get recruited by Shaggy’s childhood hero, the Blue Falcon and are asked to join the Blue Falcon’s mission.

To Velma, Daphne and Fred, this looks like Shaggy and Scooby were kidnapped. The three put their heads together to try and figure out where the pair could be. They meet bad guy Dick Dastardly and his group of robotic minions. Dastardly is after Scooby because Scooby is the last descendent of Peritas, Alexander the Great’s dog and only Scooby can open the door to a room of riches.

What happens to Scooby? And Shaggy?

Can these meddling kids save the day and defeat Dastardly?

Or is there a twist here?

I’ll admit, I’m not the biggest Scooby Doo fan, but I liked this movie. It was a nice re-introduction of the classic characters from the original series and movies. With an all-star cast, it does have a similar feel to the Scooby Doo cartoons from the past.

There are famous lines, similar sound effects and the classic hijinks any Scooby Doo fan, including the smaller ones, have come to love. Even the classic explanation “jinkies!” It features a nice message about friendship and being a hero.

I recommend it whether you’re a big fan of Scooby Doo or just kind of a fan. One Scooby Snack u–wait ... let’s make it two, because Scooby could never have just one. <