It’s been done; more than twice. A big guy has to, for whatever reason, look after a kid or kids and their tough disposition has to adjust to a softer one. Whether it was Vin Diesel in ‘The Pacifier,’ Dwayne Johnson in ‘The Game Plan,’ or even as far back as Schwarzenegger in ‘Kindergarten Cop’ the premise is not new. However, despite this being recycled I found a perfect blend of action and comedy in the Amazon Prime original movie ‘My Spy’ about a CIA agent, JJ, (Dave Bautista) who’s sent on surveillance to protect a mother and daughter and soon realizes this is no ordinary nine year old.

JJ meets a Russian general in the beginning. As soon as negoiations begin to go off the rails, the CIA team monitoring him become concerned. JJ even admits out loud that ‘being a soldier came naturally, but this is weird.’ He says he is good at one thing and proceeds to demonstrate what that one thing is. This action-packed scene has some great explosions. 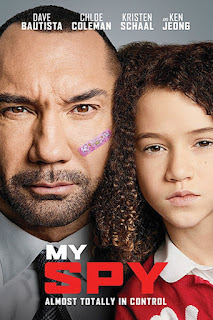 Despite what, at first glance might be regarded as a success, JJ’s boss (Ken Jeong) isn’t pleased with JJ’s work and says he might not be cut out for work at the CIA. JJ is given a surveillance assignment with IT woman (and JJ’s #1 fan), Bobbi (Kristen Schaal). They are sent to protect Sophie (Chloe Coleman) and her mom, Kate (Parisa Fits-Henley) from Sophie’s uncle Marquez (Greg Bryk). Sophie recently moved to the United States from Paris and is having trouble making friends.

Bobbi and JJ set up shop in Sophie’s apartment building and install cameras in her home – creepy, I know. After finding one of the cameras, Sophie catches JJ and Bobbi and uses that information to blackmail JJ into having him take her to an ice skating party. According to JJ, this will be a one-time deal. Later, thinking her daughter is in danger, Kate attacks JJ, but Sophie sticks up for him. He joins the two for dinner.
Their one-time deal turns into more, when Sophie needs to take someone to ‘Special Friends Day’ at school and takes JJ. Sophie and JJ grow closer and do nice things for each other like when she tells him she wants to walk all cool-like away from a big explosion he lights a bunch of sparklers, so she can see what that might be like. This presents itself again at the end of the movie. All the while she is also trying to set JJ up with her mom; some attempts are more successful than others.

Bobbi gets upset with JJ for getting so close. Meanwhile, the mission to catch Sophie’s uncle has ended and the boss fires JJ and Bobbi. Although, the mission may not be completely over...

What happens to JJ, Sophie and Kate?

Whether or not you think the the tough guy-kid genre is overdone I’d recommend ‘My Spy.’ It was fun from start to finish. Bautista and Coleman are an excellent pair. The music isn’t bad either. There is mild language and violence, but it’s also emotional in spots. The end will have your heart racing but will also make you smile. I give this: two blue betta fish up. <