Whether you’ve seen him talking to George Costanza or with one of his many comedic friends in a variety of cars while they drink coffee, Jerry Seinfeld delivers an entertaining, funny performance every time. Shot in New York City, ‘23 Hours to Kill’ is no exception. And given the current situation, a somewhat appropriate title. In previous specials, like ‘I’m Telling You for the Last Time’ (which I recommend), Seinfeld steers more toward general observations and less about himself. In this special, he lets the audience in, sharing details of his personal life.

After an impressive opening, Seinfeld walks on stage, unfazed, relaxed and ready to do what he does best. 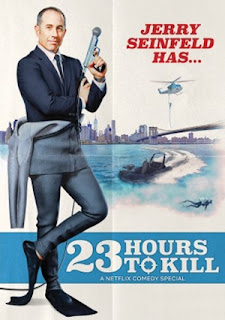 His observations are relatable as he talks about the inconvenience of socializing and ‘going out.’ He even refers to his special as a ‘made up, bogus, unnecessary, special event.’ He goes on to talk about killing time. Seinfeld lets the audience and the viewers know, that to some extent, we know him, and he even knows us.

Seinfeld has a bit about things being great and not-so-great (he uses a different word) which is both funny and spot on. He says the the two are very close to each other. There is talk of food, especially breakfast, which made me remember the row of cereals in Jerry’s apartment from his show.

He says we have a dependence on phones and goes on about other technologies. Are we using our phones or are our phones using us? Seinfeld agrees texting is great. He has a great line about how being a comedian feels like an ol’ timey profession because he is actually talking to an audience. It would be quicker if he just texted his set and then everyone could leave.

Like many of his specials, a lot of Seinfeld’s material speaks to everyday situations. But in this one, he lets the audience peak behind the curtain and into his personal life – just for a moment. Since, Seinfeld is generally observational, it’s nice to hear him talk about being a dad and in doing so he describes the mission of babies. And how fathers dress.

Some of the routines I’d heard before, but it doesn’t matter. In my eyes, he’s one of the best, if not the best. And those eyes were watering from laughing while I was watching this special.  As I would expect, his bits are solid, clever and flow seamlessly into each other – if that’s what he wants them to do.
Seinfeld is definitely one of the faces on my Comedy Mount Rushmore. He has been consistently funny for over 20 years and each special only drives the point home that he is one of the greats. Highly recommended. Two Pop Tarts way up!

Posted by The Windham Eagle at 2:42 AM