What would you do if you found $100,000 hidden in a trunk? Would you tell the police? Or not? Netflix’s original movie ‘Dangerous Lies’ tells the story of Katie (Camila Mendes) who is a caregiver for Leonard (Elliot Gould).

Katie and her husband Adam (Jessie T. Usher) come across cash hidden in a trunk after Leonard’s passing. From there, things get a bit tangled and it seems like Katie and Adam might be in danger.
At the start, Katie is working in a diner when she and her husband, Adam, witness a robbery, which Adam stops. 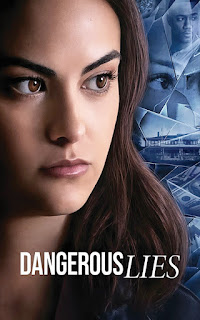 Roughly four months later, Katie becomes a caregiver for Leonard and Leonard trusts her and enjoys her company very much.

Katie and Adam are in a lot of debt. When she confides in Leonard, he offers to help out, but she turns him down. Meanwhile, a real estate agent (Cam Gigandet) stops by Leonard’s home and asks Katie if Leonard would be interested in selling. He explains he has a very motivated buyer. Katie assures him Leonard’s house is not for sale and never will be.

A short time later, Katie discovers Leonard has given her a check for $7,000. She thinks it’s a mistake, but she and Adam really need to pay their bills that day, so they decide to cash the check, pay their bills and pay Leonard back later – but they never get the chance. The next time Katie visits Leonard, he has died.

Adam finds a trunk with a hidden compartment and underneath is almost $100,000.

Later on, Adam goes looking for the money and is attacked. Adam and Katie decide to put this money in the bank to protect it from being stolen.

After Leonard’s cremation service, they meet Leonard’s attorney, Julia (Jamie Chung) who has some good news for the couple. Financially, the once struggling Katie and Adam are better off than they were. The attorney does warn Katie that there are big changes coming her way and she hopes she’s ready for them.

While all this is happening, the real estate agent continues to pressure Katie. And the detective who is investigating Adam’s attack and Leonard’s death, Detective Chesler (Sasha Alexander), keeps the pressure on Katie.

Adam believes someone is following him. Detective Chesler speaks to Katie’s boss, Mr. Calvern (Michael P. Northey) where a paper trail of payments made from Leonard to Katie is forming. A few other discoveries are made that make Katie and Adam question how they should handle their situation.

After an incident occurs, Detective Chesler thinks something is off about Katie and Adam’s story. She thinks Adam could be a suspect in Leonard’s death.

Did Adam kill, or at least plot to kill Leonard?

Is there someone else involved?

Am I leaving out crucial information?

This is a slow, slow burn. It isn’t until about halfway through the movie that things being to pick up. There are a few curveballs and twists and turns.

Without giving anything away, the ending is slightly (very slightly) action packed. And it’s mildly predictable.

While this thriller did not have me on the edge of my seat, it’s a decent, entertaining movie – maybe even a diamond in the rough. <