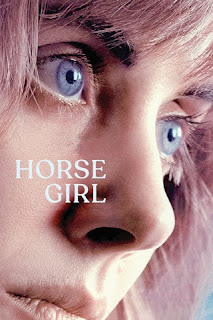 Sarah (Alison Brie) is a quiet girl who likes horses and keeps to herself, watching TV and doing crafts. After some strange things begin happening to her, she suspects she might be a clone, a clone of her grandmother. No one really takes her seriously and from there, the weirdness continues.

Sarah works at a craft store and is talking with co-worker Joan (Molly Shannon). They are talking about DNA testing and Joan is telling Sarah she did a DNA home test kit and found it really interesting. Sarah replies she really doesn’t know a lot about her family.

Sarah lives with a roommate, Nikki (Debby Ryan) and one night after Nikki comes home with her boyfriend, Sarah is caught standing with her eyes facing the wall.

Joan gets Sarah a DNA kit for her birthday and Sarah sends away for the results.

Nikki encourages Sarah to go on a double date for Sarah’s birthday. After a night of drinking and dancing, Sarah experiences some weird stuff. She hits it off with Darren (John Reynolds) and they begin dating.

Sarah’s car is ‘stolen’ one morning and found in the middle of the road. It’s towed to an impound lot where her stepfather, Gary (Paul Reiser) helps her retrieve it. Sarah does not know how it got there. Sarah questions Gary as to when her mother, now deceased, began acting weird.

At one point, Sarah finds herself standing outside next to a payphone holding a receiver in her hand and she has lost track of time. Her co-worker Joan recommends she sees a professional. Sarah does. She also notices she has what appear to be bruises on her leg and body. She asks the doctor if there is a possibility she is a clone. He kind of laughs it off.

On a date with Darren, she wants to prove she is a clone and suggests they dig up her mother to get some of her mother’s DNA. Soon, Sarah is checked into a mental facility. Sarah does not remember the social worker who has worked with her before. More weird stuff happens.

What will happen to Sarah? Is she a clone?

Sarah’s actions made me think more about mental health issues than aliens, but aliens do have a role in this movie. The line of reality is blurred for the viewer, just like it’s blurred for the main character. A strange movie where sometimes you don’t know what’s real and what’s not. There’s a lot of strange stuff that happens. There’s more nudity and sex than I was expecting and I’m still not entirely sure if that actually happened. The plot is somewhat of a slow burn to get to the end where only some pieces connect themselves to others. The ending is only a little satisfying, but I still have questions. Despite its oddness, I enjoyed this movie. I Recommend watching it. 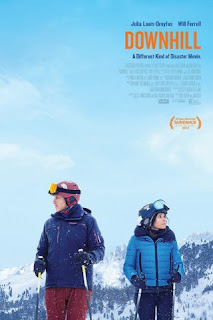 A family takes a vacation where the whole purpose was to have fun and spend time together, when a reaction to an avalanche derails the tone of the vacation. From there, events only go from bad to worse.

A remake of the Swedish film “Force Majeure,” a family travels to Austria for a ski vacation. They’re about to sit down to have lunch when they hear a giant boom and see an avalanche coming towards them. As it gets closer, it becomes apparent, this avalanche is not slowing down and covers the area where the family, and other patrons are sitting. Billie (Julia Louis-Dreyfus) ducks down as she pulls her children close to her for protection. Pete (Will Ferrell) grabs his phone and leaves the table.
As it turns out, everyone is fine, but the rest of the trip is ‘Downhill’ from there.

The family is on edge after, everyone is very quiet. Billie is upset with Pete. That night, Billie and Peter have dinner with a pushy hotel guest, Charlotte, (Miranda Otto) and her husband. The tension during this scene is kind of uncomfortable to watch as it’s obvious Billie doesn’t want to be there and is still upset about how Pete reacted, and is still reacting to the avalanche, as he describes the avalanche in a nonchalant way.

Things spiral from there on. The family is supposed to go heli-skiing; down, off-trail skiing reached by helicopter, and they end up not going because they all get in a big argument and miss the helicopter.

Pete invites a coworker of his who happens to be visiting the same area; Zach (Zach Woods) and girlfriend Rosie (Zoe Chao) during their visit. Billie and Pete get in a big fight as Zach and Rosie awkwardly observe. During this fight, Billie accuses Pete of abandoning his family during the avalanche and Pete denies it. The next day, Billie decides to take a day by herself. She inadvertently meets up with Charlotte where they have a discussion about happiness. Billie skis with a ski instructor and ends up kissing him. Meanwhile, Pete and the boys are having a sub-par time at a local ski park.

Billie and Pete spend more days apart. Billie runs into Rosie where they have a discussion about the fight to which she and Zach had ringside seats. Pete and Zach spend the day skiing and then go to a club.

The family meets back for dinner where the atmosphere does not improve. Afterwards, Pete tells Billie she was right about her account of the avalanche, he did run away. Billie says: “No one is asking you to stop an avalanche, I’m just asking you to survive one with us.”

How will this vacation end? Will Pete and Billie reconcile? Or is their relationship in for its own avalanche?

I thought this was a solid movie. I found it touching, sad, funny and at times relatable all in one. Despite the sometimes hard to watch moments, this is overall a fun movie; I’d recommend seeing it in the theater. Two skis, with or without poles, up. 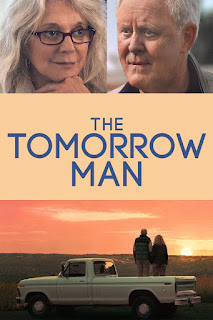 Last week’s movie was definitely on the heavy side, so with Valentine’s Day in progress, coming up or past, depending on when you read this, here is a lighter movie in which no one is running from the law.

Ed (John Lithgow) is I guess what you could call a Dooms Day prepper. He has a special room stocked with supplies and talks out loud and in chat rooms about ‘it all going down’ a lot. Ronnie (Blythe Danner) is more of a free spirit who prefers living in the moment.

“The Tomorrow Man” begins with Ed telling his son the importance of being ready. Ed is constantly in chat rooms talking with other like-minded individuals about conspiracies and what they believe to be strange occurrences; always planning for tomorrow.

When Ed meets Ronnie at the grocery store, he can’t get her out of his head and purposely stages a meeting. At first, she seems a little put off by Ed, but they go on a date and talk about their lives. Ronnie lives a very quiet life; her daughter died very young and she tells Ed she was her whole world. Ronnie now works at a boutique. After their date, Ed freaks out and tells Ronnie he really likes her and that scares him. Despite Ed’s strange behavior, they begin spending time together.

Ronnie goes over to Ed’s where they watch TV. Ronnie tells Ed she likes being in his home. She falls asleep on his couch while watching TV. Afterwards, Ronnie is late for work. This part is a little funny.

Ed is kind of grump and thinks everything was better ‘back in the day’ (though he never actually says that exact sentence). Ed begins to trust Ronnie more and shows her his secret room, stocked with supplies. He tells her it’s his security blanket, his 401K. They spend more time together and grow closer.

He invites Ronnie to Thanksgiving dinner at his son’s house. Ronnie is excited for this. However, Ed and his son, Brian (Derek Cecil) have a rough relationship and Thanksgiving dinner turns into a big argument with everyone leaving the table except Ronnie and Brian’s wife, Janet (Katie Aselton).
At one point Ed sees Ronnie’s house and there are big piles of stuff everywhere. This scares Ed a little. While at Ronnie’s, Ed has a mini-stroke. He ends up being ok, but does this change the way he views the world? Or will he insist his old way of doing things is much better? Similar to Ebenezer Scrooge, can the people that love him help him realize it’s better to not always focus on tomorrow?

Overall, this was a good movie. It has the important lesson to be present, but not to worry about the ‘what ifs’ that life throws our way. Not an easy lesson to learn. Life is unexpected; sometimes, you’ve got to roll with the punches. This movie is kind of funny and has several heartfelt moments. I would recommend this as a movie to watch in the vicinity of Valentine’s Day. Two cans of non-perishable food up.

Posted by The Windham Eagle at 2:31 PM No comments: