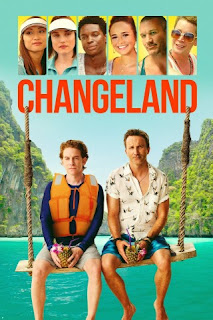 After Brandon (Seth Green) suspects his wife is cheating on him, he takes his anniversary trip alone, where he meets up with friend, Dan (Breckin Meyer). As the two travel Thailand, they discover life can offer more than they are aware.

The movie begins with an unfeeling Brandon flying to Dubai where he meets up with Dan, whom he hasn’t seen in a while. Brandon tells Dan he suspects his wife, Vanessa, (who you never meet) is cheating on him and Dan asks Brandon if he plans to fight for the relationship.

While in Thailand, Brandon does not enjoy the incredible experiences and scenery that surround him. All he is focused on is his marriage ending. He and Dan tour Thailand and discuss the situation. Brandon is not sure how he would fight for the marriage; and he does not want to get a divorce. Dan tells Brandon he never really liked Vanessa because of the way she treated him and Brandon.

Dan and Brandon continue to have incredible experiences, travel to amazing places and meet interesting people; through most of this, Brandon is very uptight.

On a coral tour, they meet Ian (Macaulay Culkin) who was originally from South Dakota, but he did not want the life that was offered there, so decided to move to Thailand. Brandon asks him “don’t you miss your life?” Ian replies, “How can I miss a life when I’m busy living it.”

Despite encouragement from Ian and others, Brandon is still very scared of taking chances and won’t do things like jump off an embankment into the water or explore a cave that’s under a waterfall. He remains unhappy for most of the trip. He wonders what he is doing there and at one point tells Dan he wants to go home.

Dan tells Brandon they are going to a bar with Ian where they run into a couple tour guides (Clare Grant and Brenda Song) from one of their tours. Some crazy things happen while they are in the bar. Will Brandon’s begin to appreciate Thailand? Will he get back together with his wife?

OK, let me start with the positive. This movie had a very cool message about being present, enjoying yourself and appreciating what you have. It was actually shot in Thailand and the scenery is spectacular. However, this is a slow movie with little conflict that didn’t keep me wondering what was going to happen. Despite its star-studded cast, ‘Changeland’ fell flat. It’s so slow, you kind of forget there’s conflict at all and it’s more about a guy moping around Thailand. It’s billed as a comedy, but it is not that funny. I would not recommend it. Two thumbs down. Sorry, Kevin McCallister.

Posted by The Windham Eagle at 12:53 PM No comments:

Since “Star Wars: Episode IX - The Rise of Skywalker”, has been in theaters for several weeks now, it seems like a good time to evaluate the live action films of the storied franchise to date. Having seen these movies at least several times each, I decided to rank the films in order of worst to first, with my favorite entries ultimately being the most memorable/meaningful to me. Please enjoy my completely biased rankings of this sprawling space opera, complete with a 1-10 rating and best scene for each movie! 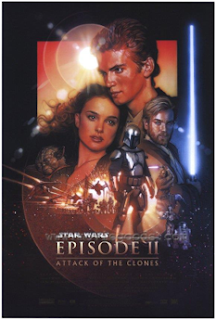 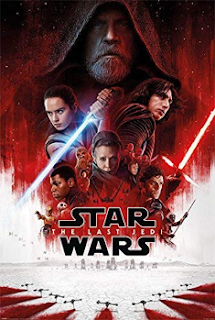 Posted by The Windham Eagle at 12:25 PM No comments: Ethiopia, 2010. A severely injured man is being taken from a mine; he is bleeding badly. Two miners are then seen looking for and finding a large precious opal.

Now, it’s 2012 and Howard Ratner (Adam Sandler) is getting a colonoscopy. Ratner is a gem dealer in New York City. He owes several people a lot of money and a few guys have come to his office to collect. Each time Ratner makes a little bit of money he’s quick to gamble it to try and make more. Things don’t always go his way though.

(At the time) Celtics power forward Kevin Garnett comes into Ratner’s store and is looking for some watches. Ratner has just received the precious opal from Ethiopia and is so happy, he shows Garnett. Garnett is mesmerized by it and immediately wants it. Ratner tells him it’s set for auction. Ratner does let Garnett hold on to the opal for a few days, taking Garnett’s championship Celtics ring as collateral. Ratner pawns the ring for $21,000 in hopes he can quickly make the money back to retrieve it. The collectors are watching Ratner this entire time. Ratner is also being followed by other individuals he owes.

Ratner has bet on a Celtics game that could give way to a big payout. Because he is always wheeling and dealing, Ratner doesn’t give his family the attention they deserve. Ratner has a girlfriend, Julia (Julia Fox) and he and his wife Dinah, (Idina Menzel) have made plans to divorce after Passover. At his daughters play, he is followed by some thugs and kidnapped after spotting two of the collectors sitting behind him. The thugs take everything Ratner has and leave him naked inside his car trunk. His wife bails him out.

Garnett still has the opal and Ratner goes to several locations looking for it. Ratner catches his girlfriend at a club with singer, The Weekend. Ratner and she have a big fight and tentatively break up. Later in the movie, Ratner tries to make amends with Dinah, and she tells him she never wants to see him again.

Howard finds out the opal was appraised much lower than he initially thought, so he asks a family member of his (Judd Hirsch) to bid against Garnett at the auction in order to drive up the price. Things don’t go Howard’s way and he ends up having a bit of a nervous breakdown.

Will things turn around for Howard Ratner? Will he be able to pay back all the people he owes money to?

I knew going into this, this was not your typical Adam Sandler movie. Sandler gives an incredible performance. I felt this was a fast-paced movie with a great story about a guy consistently down on his luck – through fault of his own. I found myself rooting for Howard even after I watched him make bad decision after bad decision after bad decision. The plot definitely kept me wanting to know ‘what’s going to happen next?’ This is a terrific movie that I’d recommend seeing in the theater. It has an ending you might not see coming. Two precious, ‘uncut gems’ way up.

Posted by The Windham Eagle at 2:01 PM No comments: 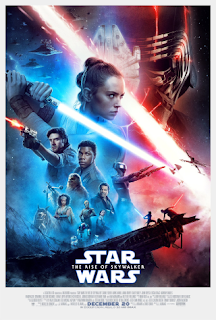 “Star Wars: The Rise of Skywalker” follows 2015’s “The Force Awakens” and 2017’s “The Last Jedi” as the concluding chapter of Disney’s sequel trilogy. It also serves as the final installment of the nine-episode “Skywalker saga.” Director J.J. Abrams (“The Force Awakens”) came back to helm this picture, building off of Rian Johnson’s work on “The Last Jedi”. Additionally, Daisy Ridley, John Boyega, Oscar Isaac, and Adam Driver all return to their starring roles while archive footage of the late Carrie Fisher was used to complete her final scenes. As a loyal fan of the saga, I was really looking forward to seeing how this epic narrative came to a close.

As seen in initial posters, the evil Emperor Palpatine (Ian McDiarmid) has seemingly returned from the dead and now poses a threat to the surviving members of the Resistance. Meanwhile, Rey (Daisy Ridley) is completing Jedi training in preparation for her inevitable rematch with Kylo Ren (Adam Driver). Soon, she joins forces with Finn (John Boyega) and Poe Dameron (Oscar Isaac) in a desperate effort to save the galaxy once and for all.

“The Rise of Skywalker” is a bold film that brings the stakes of this saga to a whole new level, to say the least. While I found the development of the monumental threat to be a bit rushed this time around, there is no denying that it led to an unbelievably exciting thrill ride of a movie. It was so satisfying to see our trio of new heroes finally team up for a substantial journey and the comradery of the group is fueled by powerful, authentic performances. The force connection established between Rey and Kylo Ren in “The Last Jedi” is once again showcased spectacularly, culminating in a stunning conclusion to that key element of the trilogy.

Putting aside my thoughts on the choppy exposition, I still found this to be amongst the most exciting of the Star Wars films. As expected, the visual effects are absolutely off the charts in a number of standout scenes, including a gritty chase sequence on a new desert planet called Pasaana. Like much of the material released since Disney’s acquisition of the franchise, this movie offers something for everybody through a faithful blend of nostalgic elements and a story for a new generation. Ultimately delivering a well-deserved, heartfelt conclusion, “The Rise of Skywalker” stands as a grand finale that shouldn’t be missed.

Posted by The Windham Eagle at 1:59 PM No comments:

Movie Review: “The Movies That Made Us”

We are all familiar with, or at the very least know of these four popular movies: “Home Alone”, “Ghostbusters”, “Dirty Dancing” and “Die Hard”. Have you ever wondered what went on behind the scenes? Or what it took to do some of the stunts/action?

This four-episode, one season Netflix series gives interesting background information about these well-liked films. It features interviews with cast, producers and those involved with the movies. They talk about working on the films and give tidbits about these well-liked movies. Here are just a few fast facts about some of these classics:

Dirty Dancing (Episode 1)
Baby is based on an actual person.
Initially, Winona Ryder and Sarah Jessica Parker were considered for the role of Baby. Billy Zane was almost cast as Johnny Castle.
Swayze and Grey weren’t exactly crazy about each other – in the beginning.

“Home Alone” (Episode 2)
Daniel Stern originally turned down the opportunity to be a henchman
Large portions of the movie were filmed in an abandoned high school
There were no special effects or CGI (Computer Generated Imagery) for any of the stunts done on “Home Alone”, so all the hits and slips and falls actually happened

“Ghostbusters” (Episode 3)
Dan Ackroyd wrote ‘Ghostbusters’ for himself, John Belushi and Eddie Murphy.
There were two different titles for the movie; they lucked out to get the one everybody knows.
There were 12 slimers created before the designer landed on the one in the movie.

“Die Hard” (Episode 4)
It is based on a book called “Nothing Lasts Forever”.
They were legally obligated to initially offer the lead to Frank Sinatra.
Neighbors and occupants of the buildings and areas around where they were shooting complained of all the noise and explosions that happened during filming.

The big scene where the helicopter and the top of Nakatomi Plaza explode is a little different than you might imagine.

Overall, this is a fun series. It’s interesting to learn the story behind the script. Sometimes, I felt like producers, directors, creators, etc. go on a little too long about lesser interesting parts of a film – like what it took to secure funding. Some of these episodes are more entertaining than others, depending on which movies you like, but I found all the episodes feature facts about the movie that I may not have expected. I would recommend this series as a post-holiday, watch-in-one-weekend series. I’m hoping and looking forward to a second season. Two VHS cassettes way up. Now, where’s that VCR?

Posted by The Windham Eagle at 12:16 PM No comments: