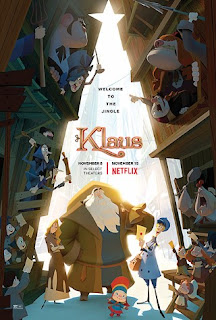 Every year, around this time, millions of letters are written to one man, asking for something for Christmas. But, how do those letters get to him? Who is responsible for seeing they are delivered?
“Klaus: is an animated tale of postmaster-to-be Jesper (Jason Schwartzman), whose wealthy father wants him to be a postmaster. Jesper has spent nine months at the postmaster academy and did not do very well; his heart is not in it, and he likes living off his father’s wealth.

His father won’t have any of this and sends Jesper to Smeerensburg to be their postmaster. He gives Jesper an ultimatum: spend a year in Smeerensburg, develop a working post office and stamp 6,000 letters or be cut off from the family fortune.

Jesper is less than pleased about this and on arriving in Smeerensburg, ‘home of the world’s finest feuds’, it is a dark, unwelcoming, cold place. The townspeople are nasty and laugh when he tells them he is there to be their postmaster.

At first, there is nothing to mail. Looking for mail, Jesper heads to the Woodsman’s cabin and gets trapped inside. However, while he’s in there he finds shelves and shelves of toys. He also meets a somewhat unfriendly man named Klaus (J.K. Simmons). With the help of Jesper, he and Klaus deliver a toy to a child who sent Jesper a letter. Word gets out that writing letters means you get a toy, so many of the children of Smeerensburg begin writing to Klaus. Jesper’s letter count begins to rise.

Since Smeerensburg is the ‘home of the world’s finest feuds’ the Krum and Ellingboe parents (Joan Cusack and Will Sasso) do not like their children playing with one another. And they do not like Jesper. As more and more letters pour in, it becomes clear that some of the children cannot write and go to a teacher, Alva (Rashida Jones) for help. Alva had pretty much given up on being a teacher and was saving money to leave. She thought there was no point in trying to teach the children anything, but the arrival of Jesper begins to change her mind.

Jesper stresses the importance of being good and helpful in order to get toys, and this changes the behaviors of many of the children.

Meanwhile, Ellingboe and Krum want to stop Klaus and Jesper and return Smeerensburg back to the dark and dismal place it was.

After some time, Klaus has delivered all the presents he had. Jesper suggests Klaus make more. Klaus becomes very angry at this idea and tells Jesper to leave. Here, we learn a little about Klaus’s past.
After some convincing, Klaus agrees to make more toys. Alva has decided to stay as a teacher and tells Jesper that he has really made a difference in Smeerensburg.

Jesper’s father arrives in Smeerensburg and congratulates him on meeting his goal and that he can now return home. This is the doing of the Ellingboe/Krum team. Will Jesper decide to go, or will he stay in Smeerensburg?

This is a perfect movie for the holiday season. With an all-star cast, it comes at the story of Santa from a different angle and is fun(ny) for both kids and adults. This is a great tale of friendship and the ending will leave you feeling happy. Highly recommended.

Posted by The Windham Eagle at 1:18 PM No comments:

Movie Review: “Living with Yourself” 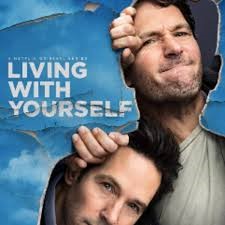 A Netflix TV Series
Rated: None

Have you ever wondered what it would be like to meet your clone? How would they act? What would they do? Would it be problematic, or nice to have a doppelgänger around? These questions were answered for Miles Elliot (Paul Rudd), who has grown bored and indifferent with his current life and is looking for a way to better himself. He gets a tip from a co-worker who got a special, experimental, treatment that improved his life.

This eight episode Netflix series is a little weird. But the end of each episode does keep you wondering, what will happen next?

The series begins with down-on-his-luck Miles Elliot going through the motions of his life. When he hears about this special treatment that essentially creates a new, better you, he is curious and decides to put up the $50,000 it costs. The promise is he will be made into the best he can be.

However, something goes wrong during the treatment and “real” Miles Elliot wakes up underground, covered in plastic wrap. He arrives home to discover he is already there.

The real and fake versions of Miles compare how they’re different. They are also very careful to keep this from friends and family, especially Miles’s wife, Kate (Aisling Bea). Real and fake Miles return to the spa, where the cloning took place, and demand a refund. Although they are refunded, what will become of the “fake” Miles?

One of my criticisms of this series is I found  it difficult to differentiate between the clone and real versions of Miles. The real Miles decides to leave town. So, as I understand it, the clone Miles is pretending to be the real Miles – he’s the one who goes to work and does things like be the life of the party, at actual parties. There are certain areas where “real” Miles steps in. We soon learn that fake Miles has trouble handling the responsibilities of real Miles’s life.

If you can deal with the fact that this is a series about a man who is living with his clone and dealing with the problems that might arise if an identical version of yourself was out there living your life, you might enjoy this series; I did. There is solid character development, with an interesting backstory – we learn the struggles Miles and Kate are facing and why Miles thought the cloning would improve things. There are a few excellent bombshell moments throughout the series that definitely keep you engaged. I felt the episodes did not drag. Although, there is a lot of back and forth with a timeline throughout the series, which can be a little confusing.

I thought this was a funny, weird, entertaining series and the end leaves you hopeful for a season two. I would recommend it. Two identical thumbs up.

Posted by The Windham Eagle at 1:04 PM No comments: 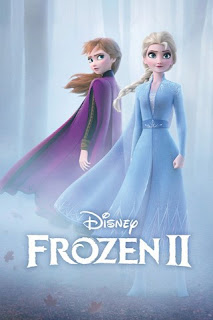 It gave a nice view on what it would be like if you had magical powers and you had to deal with changes in your life. The movie starts with everything going great, and then Elsa (voice actor, Idina Menzel) who is now the Queen of Arendelle, hears something beautifully magical calling her. This is when the adventure begins!

Anna and Elsa (voice actor, Kristen Bell) go on a journey to an enchanted forest to find out why Elsa has magical ice powers. Sven the reindeer leads them, accompanied by Olaf the snowman, (Josh Gad) and Anna’s boyfriend Kristoff has this really shining moment, which you’ll have to see the movie to understand. Let’s just say this: Kristoff (Jonathan Groff) has all of his dreams come true.

There are many changes in this movie, almost all of which get resolved. It’s interesting because there’s no real antagonist. Instead of one bad guy, there are different challenges the characters face. In some places, the movie was a bit scary. In other places, it was more beautiful than you can imagine, especially at the end. The message was to deal with change even when it gets hard.

I think that everybody who loved the first Frozen movie and who has ever dreamed about going on magical adventures should see this film!

Sage’s five-year-old brother Ian adds that “Frozen 2” was great, and the moral of the film is to never give your sister magic.

Posted by The Windham Eagle at 1:09 PM No comments: