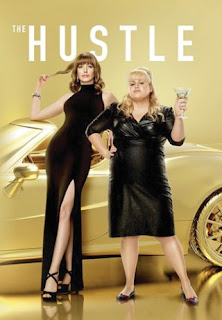 Josephine Chesterfield (Anne Hathaway) and Penny Rust (Rebel Wilson) are two very different types of con women. One is no nonsense, while the other takes a different approach. They both have the exact same goal: to make themselves rich.

I thought this movie started with funny dialogue right away. We meet Penny as she is in the process of conning a guy in a bar. Part way through, she is outed by the last guy she conned and the police chase after her. She manages to escape in a very clever way.

We meet Josephine in a casino, where a man is trying to con her, but is unsuccessful. Cut to Penny and Josephine on a train and Josephine overhears Penny running a con. Penny confesses to Josephine she is a con woman.

While Josephine is setting up her next con, she quickly realizes Penny has beat her to it and already run her con. Josephine saves Penny from this con, as she may have gotten in a little over her head.

Later, Penny suggests they run cons together, but Josephine insists she works alone. Penny asks for Josephine’s help and she eventually obliges. Soon, the two can effortlessly con one man after another.

After a series of cons, Josephine refuses to pay Penny. Penny decides to no longer work with Josephine.

As the island they are both on isn’t big, the two realize they both can’t have success conning the same people. So, they make a bet: first one to con a guy out of $500,000 is the winner and the other must leave. One week; may the best con win. They pick a Mark Zuckerburg-esque guy (Alex Sharp) who designed a smartphone app that has become very successful.

As the two try to outdo each other there is a cringeworthy moment and a lot of physical comedy. Penny finds out Thomas Westerburg (Sharp) might not be what he seemed and tells Josephine they should find another guy to con. Will they? Who will win the bet?

I enjoyed this movie. I found Hathaway and Wilson good partners-in-crime and very likeable con-women. The movie is funny in parts and a good time. There’s a decent twist at the end that I did not see coming. It’s another movie where you should stay through the credits. I think it is worth renting, just don’t con anyone out of the money to do so.