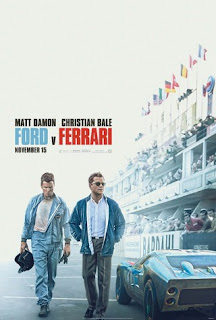 Carroll Shelby was an American automotive designer, race car driver, entrepreneur and author. Ken Miles was an English race car driver and engineer. The two worked together to help the Ford Motor Company beat the Ferrari Motor Company in the Le Mans 24-hour sports car race. Prior to 1966, Ford had never beaten Ferrari.

The movie begins with Carroll Shelby (Matt Damon) sitting in the doctor’s office where the doctor tells him he has a heart condition and that Shelby is lucky to be sitting there.

The audience is then introduced to Ken Miles (Christian Bale) who is a mechanic and race car driver.
Cut to Henry Ford II (Tracy Letts) telling factory workers they’re all fired, except for the man who comes to his office with an idea, an idea that can help Ford beat Ferrari.

A little while later, we meet American executive, Lee Iacocca (Jon Bernthal) who wants the Ford Motor Company to get into racing. “We need to think like Ferrari; his cars mean victory. What if Ford meant victory?” Iacocca asked.

Iacocca proposes a merger between Ford and Ferrari, as well as a Ford/Ferrari race team. This doesn’t go over well with Enzo Ferrari (Remo Girone).

Henry Ford II says he only wants the best of the best working on the design for their race car that he insists should be able to beat Ferrari. Iacocca goes to Shelby and asks him what it takes to win Le Mans. Shelby asks Miles to be on his team and help drive and design the car. Miles asks how much time they have to complete this immense task. Ninety days is the answer. Initially Miles wants nothing to do with this project, but his mind is quickly changed.

Leo Beebe (Josh Lucas), who is an executive at Ford, doesn’t like Miles and calls him a Beatnik, telling Shelby he needs to “put a Ford-type drive in a Ford car.”

Shelby is called into Ford II’s office and questioned as to why everyone on Shelby makes a very good case and convinces Ford II that Miles has what it takes to win. A deal is made that if Miles wins the Daytona race, he can race at Le Mans. Miles, of course, wins. Now it’s on to Le Mans.

After a rough start at the 24-hour race, Miles finds a groove, though Beebe is still looking for a way to sabotage Miles. Will Ford beat Ferrari?

I liked this movie. It’s got a lot of action and tells an interesting story. It is a little on the longer side, but it keeps a steady pace and the characters and acting kept this viewer engaged. It’s funny in parts, too. Damon and Bale are already known for being good actors and their portrayal of these real-life individuals is no exception. The ending caught me a little off guard, but this is a very good movie. I recommend you see this on the big screen...it’s a fun ride!