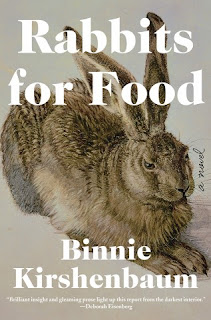 Bunny, once a novelist, now a woman on the verge of a breakdown, and later a woman institutionalized for that breakdown, is pointed, sardonic, and heartbroken.

Even though she hasn’t washed, dressed, or moved from the couch in weeks, Bunny insists on attending a New Year’s Eve party with her dedicated, sweet, and imperfect husband, Albie. The party is pretentious and obnoxious, and Bunny tries to keep it together but fails. She has a breakdown.

She’s institutionalized. Through her, we meet the other patients (the addicted nurse, the anorexic who starts pulling out her hair, the man who wears his underwear on the outside), the rules (what is allowed and not allowed), the group activities, the awful food. In the absence of the therapy dog, Bunny participates in creative writing and through her loosely interpreted “assignments” we learn about what brought her to this sad place in her life.

This book shifts in time and perspective which is, I think, intentionally disorienting. The feel of the book mimics the strange disassociation that can often mark a depressive episode. This is an emotionally powerful book—I laughed, I cried. I felt truly heartbroken for each of the characters and I rooted for Bunny to be okay. Which (spoiler alert), she kind of is.