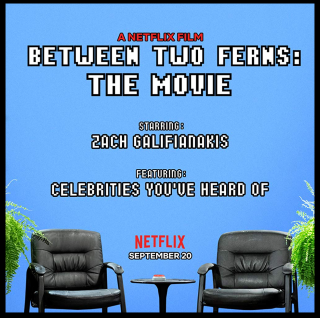 “Between Two Ferns” started as an Internet talk show on the Funny or Die website, which is run by Will Ferrell. Zach Galifianakis interviews celebrities and asks them invasive, sometimes inappropriate, questions. The interviews often spiral downhill at some point, with the guest taking a crack or two at Galifianakis. Of course, it’s meant to be funny and the interviewees are in on the joke. “Between Two Ferns the Movie” tells the story of Galifianakis and his crew travelling around the country to get ten episodes of the show in order to secure a late-night talk show deal.

We rewind to the previous 48 hours where Galifianakis is shooting a documentary about the show and explains he has been taping his shows for over a decade. He has dreamed of being a network TV personality. You meet his crew: his assistant, Carol (Lauren Lapkus), the camera operator, Cam (Ryan Gaul), and Boom Boom (Jiavani Linayao) who operates the boom microphone.

The studio has been destroyed due to the burst pipes and Galifianakis is called into the office by Will Ferrell who tells him how much he cares about how many clicks his website, funnyordie.com, gets. Galifianakis needs to shoot ten more episodes and Ferrell will give him a late-night contract. Galifianakis and his crew take “Between Two Ferns” on the road.

This movie stays very true to the short interviews that began on the Internet. Galifianakis interviews an abundance of celebrities who are less than thrilled, with a few exceptions, to be on his show. The interviews are funny, stupid funny, and I mean that in the best way possible. There is a lot of dry humor and wit. It can get a little weird in parts. The interviews are insulting, uncomfortable and sometimes raunchy.

Stay for the credits!!! The bloopers might be one of the funniest parts of the entire movie.

Galifianakis plays the part of a disdainful host very well and his supporting cast made this a very fun movie. I only wish there were more interviews. If you are a fan of “Between Two Ferns” or have never heard of it and like dry, deadpan, slightly uncomfortable, humor this movie is for you. I give it two ferns up!

Posted by The Windham Eagle at 3:40 PM