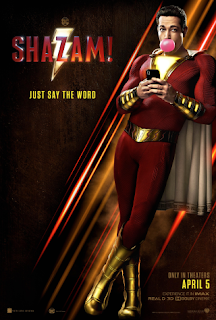 While this comic book franchise has lacked true cohesion thus far, I think that writers are starting to effectively construct a lighthearted, goofier brand of what has become an overwhelmingly popular film genre. If these great characters continue being brought to life like this in upcoming installments, I believe that the cinematic universe has enormous potential. “Shazam!” will most certainly be overshadowed by the upcoming release of “Avengers: Endgame” in a few weeks, but I must say this movie was much more unique than the “Deadpool” ripoff I was somewhat expecting.

“Shazam!” has an interesting premise in which a fourteen-year-old foster child named Billy Batson (Asher Angel) is granted magical powers after encountering an ancient wizard named “Shazam!” (Djimon Hounsou). The wizard selects Billy as his new champion, so whenever Billy says the word “Shazam!” he turns into an adult superhero (Zachary Levi). While he possesses superpowers such as strength, speed, and flight, the “grown-up” superhero still has Billy’s teenage mind. Billy explores his abilities all while adapting to a new foster family, and soon discovers that an enemy named Dr. Thaddeus Sivana (Mark Strong), has also acquired magic capabilities and is after him.

While the “fish out of water” nature of this story could have made for a boring, familiar movie, “Shazam!” turned out to be a far fresher film than I anticipated. Billy finds himself caught up in several uncomfortable, hilarious scenarios which he handles as one may expect of a rebel adolescent.

The comedy shines brightest when Billy is discovering his powers; Zachary Levi really did an excellent job of making the adult version of this character both amusing and relatable in these moments.

Needless to say, “Shazam!” is primarily a lighthearted movie, but the profound family element at the center of this story excludes this from strictly being a comedy. There are positive messages to be found in the film and I really liked the way the writers naturally worked this into a very hilarious movie. In addition to that, there were quite a few connections to other DCEU films and this may be the first time that this world building didn’t seem forced into the story. All things considered, I was genuinely surprised by how fresh “Shazam!” was and I would recommend the movie to superhero lovers and families alike.

Posted by The Windham Eagle at 2:52 PM