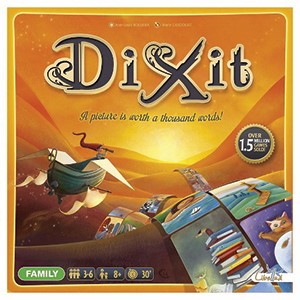 Unlike the past, being a nerd is considered hip and indicates a certain level of intelligence. So much so, that there is even a popular game show where self-proclaimed nerds proudly gather together to display their intellect and ingenuity. “Table Top”, which is a web series and can also be seen on the TBD network is a series in which individuals play a wide range of hobby gaming titles, from classic German-style board games and family games to RPGs and card games.

Due to the popularity of table top games such as these, we thought we’d give you a break from the movie reviews and review a few of our favorite games. They are as follows and are in no certain order:

*“Mysterium” is a co-op game of ghosts, murder and hilarious incompetence, in that order. All but one player is a psychic spending the night in a horrid house where a killing took place. The final player, who may not speak, is a ghost sending everyone else horrible dreams. The ghost must guide the psychics to the correct murder weapon, crime scene and culprit before the week is over, or… well, I’m not sure. Maybe the psychics have concert tickets. It doesn’t matter, and you won’t care. You’ll be laughing too much and thinking too hard. (review by shutupandsitdown.com).

*In “Welcome to the Dungeon”, players are competing to be the first to negotiate a dungeon on two successful occasions, or to be the last player standing if all other players have two unsuccessful dungeon delves. Seems simple enough, but the twists are that:

Players only know a certain amount each about what the dungeon contains.
Players don’t choose to attempt the dungeon, they choose not to, so one player will be the last remaining and will have to enter on their own.
Players don’t even have their own adventurer - one is shared between players and only belongs to a player when they have to enter the dungeon.
So, this is a game about doing what you can with a limited amount of information, resulting in a lot of second guessing, clever bluffing, and a fair bit of luck. (review by board-game.co.uk)

*In “Dixit”, Everyone is given a hand of six picture cards, and the scoreboard is laid upon the table. The candles are lit, and the sounds of the woods Spotify playlist starts to play. Finally, and most importantly every player receives a cute bunny meeple to track their score. Now, it’s time to listen.

Each turn, one player, in a puff of smoke, transforms into the ‘Story Teller.’ They pick a card, any card, and create a wonderous tale about it. Relaying to the other players through a tapestry of words, a melodious humming, or an unintelligible series of grunts or Trump tweets.

Players listen, ingesting every word, and when silence finally overcomes the Story Teller they each repay the entertainer with a card. Not just any card, but the one that they best believe fits the constructed fiction. The Story Teller collects the cards, then with all the deviousness of a caravan of carnies, they shuffle and place them against the scoreboard, numbering them from one to twelve.

Each player chooses the card they think is the Story Teller’s. After everyone has locked in their vote, there can be no changes. Only then can the Story Teller reveal their card, and the scoring begins.