Movie Review: “Spider-Man: Into the Spider-Verse” 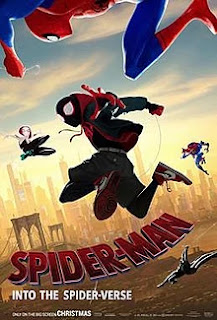 When Miles Morales is bitten by a radioactive spider in an abandoned section of subway, he is forcibly thrust into the role of a hero. While attempting to find answers about his newfound powers, Miles unwittingly runs into Kingpin, a villain hell-bent on bringing back his deceased wife and son by any means necessary.

After witnessing the debut of Kingpin’s “collider,” Miles learns the device is able to bring multiple dimensions together – though it also runs the risk of creating a black hole in the middle of New York. Though the first attempt to start the collider largely ends in failure, it does bring various “spiderpeople” from other dimensions into Miles’ world. The heroes quickly realize they will have to work as a team if they ever want to defeat Kingpin and go back to their respective realities.

For a movie featuring a cartoon pig called Spider-Ham, I was a little uncertain about all the buzz surrounding “Spider-Man: Into the Spider-Verse”. Upon leaving the theater, however, I can easily see why this movie recently won Best Animated Motion Picture at the Golden Globes. The combination of stunning animation, original narrative and emotive voice actors paved a clear path for the movie’s win.

In terms of casting, Shameik Moore did an amazing job voicing Miles, coming across as naïve yet determined to do the right thing. Jack Johnson gave life to his role as Peter B. Parker – a Spider-Man past his prime – and Hailee Steinfeld suited her role as the ever-competent Gwen Stacy. Though they only had minor roles, Nicolas Cage and John Mulaney’s characters both served as great comic relief.

The thought and care that went into each character design was fantastic. Miles and the two other central characters, Peter and Gwen, are especially well-rounded and relatable. They all have unique personalities that are reflected in their clothes and overall appearances. Because of this distinctiveness between characters, the movie never feels cluttered despite having a sprawling cast.

Of course, no review of “Spider-Man: Into the Spider-Verse” would be complete without mentioning the animation. This movie truly has some of the best animation I’ve ever seen, with certain shots that are not only visually stunning but incredibly original.

While some movies just happen to be animated, “Into the Spider-Verse” was made to be an animated movie. A lot of the scenes simply couldn’t have been pulled off any other way. The entire climax would have looked ridiculous had they tried to create it using live-action but, because it was animated, the sequence felt intense and visually striking. Furthermore, the animation allowed the movie to retain the comic book style from which it was born.

It was especially refreshing to see a protagonist that doesn’t immediately take to the role of a hero. Throughout the film, Miles struggles to harness his powers, which ultimately makes the audience root for him even more. The movie reminds the viewer that while being a hero isn’t easy, it certainly isn’t impossible. When Miles says, “Anyone can wear the mask,” he means that everyone has the ability to have a positive impact on the world. “Into the Spider-Verse” shows the audience that heroes come in all shapes and sizes, and the movie challenges the viewer to become one of those heroes.

Overall, “Spider-Man: Into the Spider-Verse” is one of those rare movies that can appeal to people of all ages. With a PG rating, the movie is safe for kids, yet it still manages to deal with mature themes that will keep older viewers hooked. “Into the Spider-Verse” knows when to be cute, funny, or heartfelt and it pulls off a convoluted plot with finesse. I would recommend it to any moviegoer, especially for anyone with an appreciation for animation.