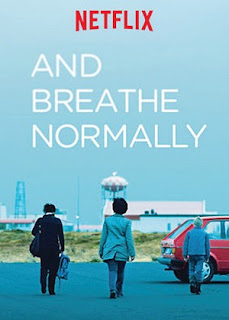 On cold and lazy Sunday afternoons, almost nothing can take me away from staying at home and watching a movie on Netflix. However, since I do enjoy foreign films from time to time (which requires you to read subtitles), I was willing to give up a bit of my laziness and dive into “And Breathe Normally,” a movie set in Iceland and spoken in the Icelandic language.

The film which won the World Cinema Dramatic Directing Award, is described on Rotten Tomatoes: “At the edge of Iceland's Reykjanes peninsula, two women's lives intersect--for a brief moment--while being trapped by unforeseen circumstances. Between a struggling single Icelandic mother, and a political asylum seeker from Africa, an intimate bond forms as both fight to get their lives back on track.”

Kristín Thóra Haraldsdóttir, stars as Lara, the young, single, proud and tattooed mother who struggles financially to raise and create a happy life for her young and accommodating son, Eldar, played by Patrik Nökkvi Pétursson. In the film we learn, in very subtle ways, that Lara once had a drug problem and is tested to slip from sobriety, she did not always have custody of her son, and her mother lives in Norway – making it difficult for her to reach out for help.

Once she is hired as a border security guard trainee at Iceland’s main airport, Keflavík, the viewer heaves a sigh of relief for the main character, believing her financial woes will be behind her. But her debt is too deep. She tells Eldar, as they are packing their few possessions, “we are going on an adventure.” The adventure is homelessness.

“And Breath Normally” was the most moving foreign film I’ve seen in a while – but it did defie my perceptions of an Iceland full of beautiful scenery as the background setting is always grim and desolate looking. But, I suspect that was intentional - to set the tone of the film.

George Fenwick of the New Zealand Herald described perfectly, my thoughts on the film: “Director Isold Uggadottir manages to keep the narrative away from melodrama or over-sentimentality. Her direction keeps a careful distance but is forgiving and empathetic to her struggling characters.”
If you are up to reading subtitles and enjoy the complexity that comes with no easy answers, then I suggest you give this film a go.

*Although this film is not yet rated, I suspect it would be considered rated R under American standards. There is one sexual scene and a few mature themes that may not be appropriate for children.

Posted by The Windham Eagle at 9:46 AM