I was only three years and 10 months old when Neil Armstrong and Buzz Aldrin landed on the moon on July 20, 1969. Ironically, there is very little I know about these two astronauts and their adventure before, during and after their space exploration. As a result, I couldn’t wait to see the film, “First Man”, directed by Damien Chazelle and produced by Steven Speilberg, when it came out in theaters on October 12. This weekend, I took the time to watch it and I have mixed reviews of this biographical movie. 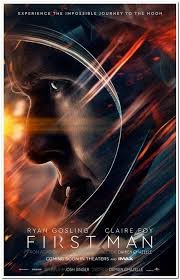 Briefly, “First Man” is the story about Armstrong (Ryan Goseling) and his life from 1961 to 1969. The film reviews the sacrifices and costs on the Nation as well as on Armstrong, his wife Janet (Claire Foy) and his two sons. The movie also lets the audience take a peak in on Armstrong’s mourning of his two-year old daughter, Karen, who died of brain cancer. He also experiences the death of two fellow astronauts who were also great friends.

Although the viewer is aware of his sadness, Armstrong never breaks down. He remains stoic and often, emotionally distant. Goseling does a fantastic job portraying this famous man in history (but I personally believe, as an actor Goseling can do no wrong, so you might take my opinion with a grain of salt.)

What I liked best about the film is that it includes the family’s perspective of having a husband and father who is going to the moon – and may never return. In one poignant scene, Armstrong sits down with his two sons and discusses the possibility that they may not see him again. The conversation would not have happened, however, if his wife didn’t demand it. It’s for this reason that I enjoyed Foy’s portrayal of Armstrong’s wife.

Although I learned a bit about history and was moved by the life of Armstrong and his family, I found this film a bit too somber for my liking. One reviewer on Rotten Tomatoes stated my perception the best: ‘“First Man" never quite connects at a gut level. For a story that shoots for the moon, it has trouble leaving the ground.”