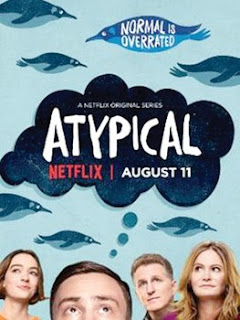 The most recent series that has me hooked is “Atypical”, a story about 18-year old Sam (Keir Gilchrist), who is on the autistic spectrum. Each show in the first season follows Sam as he searches for love, trying to fit in and to be “normal”.

Sam is certain that he loves his therapist, Julia (Amy Okuda), but upon realizing he can’t share his love with her, decides to have a “practice girlfriend” with fellow high school student Paige (Jenna Boyd). Paige, who may be on the spectrum herself, sees past Sam’s quirks and really seems to like him.

Sam lives with his mother, Elsa (Jennifer Jason Leigh) who is overprotective, ultra-organized and also seems to display behaviors from the spectrum. Sam also lives with his father, Doug (Michael Rapaport) who does his best to be a good father, trying to make up for the time he left Sam, his mother and younger sister, Casey (Brigette Lundy-Paine.) Casey toggles back and forth between being gruff with her older sibling or being a loving and protective sister.

Sam and his family are each dealing with their own demons and changes, proving that there really isn’t any such thing as being normal.

Although I have worked with children on the autistic spectrum, I often wonder if the show accurately portrays the life and behaviors of those on the spectrum.

According to a review by a mother with a child on the autistic spectrum, she had this to say about “Atypical”

“The makers of the new Netflix series Atypical, including creator Robia Rashid clearly want to help the world understand what it’s like for those on the autistic spectrum, and to deliver that lesson with comedy and warmth. Deeply well-meant and probably incredibly illuminating for those who don’t know much about the condition, the show is unequivocally a good thing in and of itself, and it’s hard not to applaud both the intention and the effort. That’s me speaking as the mother of a pre-pubescent boy on the autistic spectrum. As a critic of films and sometimes TV, I wish I could applaud “Atypical’s” result more.”

With that being said, know that the two-season series may fall flat for those who know the ins and outs of living with autism, it does offer a bit of humor and reveals, if only slightly, the life of those touched by autism.

Posted by The Windham Eagle at 7:53 AM