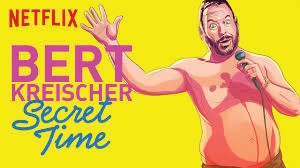 Bert Kreischer adds to the resurgence of standup comedy on Netflix with his second standup special “Secret Time.”

Through an R rated lens, Kreischer tells stories of family, friendship and bumbling through daily life even if one doesn't know how to do so. His trademark, shirtless performance is coupled with an energy that many comedians don't possess, moving about the stage and looking completely flabbergasted by the stories he is telling - whether it be the only time he made his father laugh, or his completely disbelief at the antics of his children. Kreischer seemed along for the ride with the audience as he tried to understand just as they did how these events fell in to place.

The show had a particularly adult bent, constantly dropping grown up language and themes that reminded me of unfiltered performers such as Carlin, but with his own childish glee added in to bring the intensity up a level. However, it was not a torrent of potty humor and curse words, there was a genuine intelligence to his shows. Jokes that did not seem to land near the start were weaved back into the narrative later in the special only to leave the audience roaring with laughter.

Though the first five to ten minutes may have felt a bit rocky, as the show progressed I found myself laughing more and more, to the point where I had to catch my breath and wipe tears from my eyes.  Kreischer seemed to be having incredible fun with his expert comedic performance, laughing nearly the whole set, and yet the audience was always laughing along with him. While I would certainly not recommend that you watch this with the kids, if you have time to watch it with a friend or even on your own I'd highly recommend it to any fan of raunchy comedy. This new special can be found exclusively on Netflix.

Posted by The Windham Eagle at 11:09 AM No comments:

Movie review of "The Meg". Review by Emily Maier 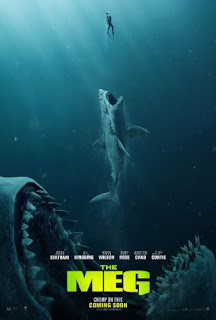 When a team of marine biologists venture into a previously undiscovered ocean trench, they find an entirely undisturbed ecosystem. Among this wondrous aquatic life, however, they encounter something that makes “Jaws” look like a goldfish.

In “The Meg’s” titular role is the megalodon, an ancient 75-foot shark with an insatiable appetite. After a confrontation with the megalodon leaves the team’s submarine stranded on the ocean floor, the research facility sends in the best rescue diver they can find: Jonas Taylor (Jason Statham). Unfortunately, in his efforts to get the team back to the surface, Jonas ends up paving a road for the megalodon to follow. With this prehistoric beast on the loose, the team scrambles to kill it before it can reach populated shores.

Ultimately, “The Meg” is a generic monster movie through and through. The director, Jon Turteltaub, is also responsible for movies such as “National Treasure” and “The Sorcerer’s Apprentice”, which should tell you something about how cheesy “The Meg” often comes across. It’s still a fun watch, but in the mindless, uninspired way that most monster movies are nowadays.

The cast features a few familiar names such as Li Binging, Rainn Wilson, Ruby Rose, Cliff Curtis, and, of course, Jason Statham. The acting is neither terrible nor compelling, but sits in some forgettable middle ground.

Similarly, the soundtrack was surprisingly mundane. The trailer’s use of Bobby Darin’s “Beyond The Sea” was wonderfully tongue-in-cheek, but the song was nowhere to be found in the movie itself. Instead, the only song I recall playing was a Thai version of Toni Basil’s “Hey Mickey.” Twice.

Prior to seeing “The Meg”, I had hoped the movie was going to be self-aware enough to poke fun at itself. After all, the trailer seems to suggest this when Rainn Wilson’s character states, “He certainly looks heroic” about Jonas. Perhaps naively, I had taken this as a sign that the movie might make light of common tropes. But aside from this instance and another mention of Shark Week, the movie seems to take itself seriously – too seriously, for a movie about a giant, extinct, man-eating shark.

Though I’m a fan of both “Jaws” and “Sharknado”, this movie seems to have fallen into the crack (or trench) between the two. “The Meg” is neither skillful enough to be taken seriously nor lighthearted enough to have “Sharknado’s” B-movie charm.

That being said, it’s hard not to be entertained by a massive shark wreaking havoc on beach-goers. If nothing else, the terrifying visuals and jumpscares featuring the shark are sure to make a few people think twice about plunging into the ocean.

My advice to potential viewers is don’t watch the trailers. Virtually all the best scenes in “The Meg” are shown in the trailers, which created a very frustrating movie experience. There were some truly gripping visuals that were effectively ruined just because the filmmakers didn’t have the restraint to save them for the actual movie.

All in all, “The Meg” took a big bite out of missed opportunities. While it’s still a fun monster flick to end the summer with, it easily could have been a lot better. Had it embraced a better soundtrack and a more playful, campy tone, “The Meg” could have been a much more memorable film.

Posted by The Windham Eagle at 9:37 AM No comments: 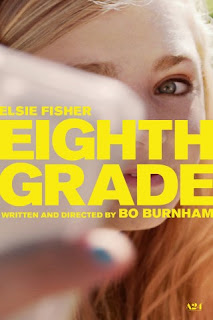 It's rare to find a movie so authentic and compelling as “Eighth Grade”, the directorial debut of
standup comedian Bo Burnham.

Kayla Day, portrayed by Elsie Fisher, is a young girl on her way to graduating from middle school, and in her final week goes on a self-actualizing journey towards adulthood.

When I entered the theater, I was under the impression that I was about to watch a quality comedy that reflects the high reviews it has been getting online. However, there was something else to the film; a coming of age story both unique and relatable. It was not a comedic romp as I had expected, but a dive into the mind of a young woman who was unsure of who she was.

Throughout the film, Burnham managed to display the silliness, awkwardness and horror that comes with being an insecure eighth grader. An expansive cast shows different interactions that echoed my own past.

Well meaning, but awkward, parenting as well as popular kids who are mean for no real reason along with a barrage of other struggles are depicted in so realistic a fashion that it is hard not to wince out of sympathy for the lead.

Burnham successfully filled the theater with laughter and fear, while passing on a message of growth.
Even with the dense narrative that takes place over the last week of the school year, the film managed to stave off any pretentious airs and remains a fun, awkward, genuine story. If you are looking for a nostalgic flick for the modern era, I can wholeheartedly recommend Burnham's fantastic first film, “Eighth Grade”.

Posted by The Windham Eagle at 7:01 AM No comments:

As long as I can remember, I have loved the famous actors and actresses of the 1930s and 40s. I adored Jimmy Stewart in “Harvey”, “It’s a Wonderful Life,” and “Philadelphia Story” – where I also worshipped Katharine Hepburn’s independent spirit.

One famous actress I wasn’t aware of during that era was Hedy Lamarr. I learned about her approximately eight years ago when I was an instructor for a hands-on science enrichment program for children pre-school to fifth grade. It was then that I learned about this female inventor.

“This scientist”, we told our students, “was a well-known actress known for her beauty but her intelligence and contribution to science and present-day technology has been overlooked.”

So, I was excited to learn that Netflix produced the documentary, “Bombshell: The Hedy Lamarr Story” and looked forward to watching the film to learn about this inventor and her life. Of course, this film directed by Alexandra Dean, focuses on the actress’ life as a celebrity who just so happened to be an unidentified inventor. As a result, my review may have a different outlook and twist than most reviews for this biographical film.

The documentary shares the eclectic twists and turns of Lamarr’s story. Born in Vienna as Hedwig Eva Maria Kiesler in 1914, the film follows her life from her early career in a highly controversial film, secretly leaving her husband and being discovered in London by Metro-Goldwyn-Mayer’s Louis B. Mayer.

The film highlights the early successful years in Hollywood, her marriages (married and divorced six times) and the many relationships she had, including one with aviation tycoon, Howard Hughes.

“Bombshell” also looks at her reason for inventing a secure, radio-controlled torpedo guidance system, known as “frequency hopping,” that is the basis of WiFi, Bluetooth and cellphone technologies used today. The film also follows her downward spiral of failure, scandal and reclusiveness.

Although her beauty and brilliance were eventually overshadowed by scandal and disaster, “Bombshell” is sensitive to highlighting her story without diminishing her wonderful contributions to society.

Posted by The Windham Eagle at 6:56 AM No comments: 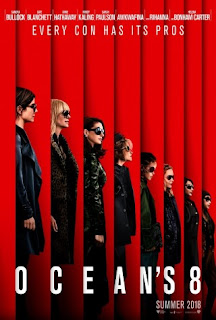 there with all the excitement, as my family and I headed to the drive-in to see it early this summer.

The plot of this story is about Danny Ocean’s estranged younger sister Debbie (Sandra Bullock) who attempts to pull off the biggest heist of the century at the New York City’s star-studded annual Met Gala.

After getting out of jail for good behavior, Debbie is on a mission to assemble her perfect all- female crew. Now, I am a huge fan of the “Ocean’s”, and in my opinion, the plot was clever on paper. But when put into action, it was sloppy and very disorganized.

The mix of actors, as chosen, did not mix well with the concept of “Ocean’s 8” and did not match any of the personalities from any other “Ocean’s.”

A significant difference I found that makes a good movie from a bad one is the action, suspense and excitement. In all the other “Ocean’s” movies, there was action and conflict in the plot, however, this all-female crew just walked through the film with no suspense. Expecting a continuation from the other films, I simply could not find the excitement that keeps you on the edge of your seat. There never seemed to be a climax to the story.

In my final opinion, I do believe that the director (Steven Soderbergh) of the first three films did a much better job than Gary Ross in this particular film.

Overall, something that was really good and very strong about this movie was the popular cast characters. Gary Ross (director) did one thing right in this entire movie: it was loaded with well-known actors. But if there ever is a next film, I would recommend the director to use their strengths and create a better storyline.

Posted by The Windham Eagle at 6:30 AM No comments: