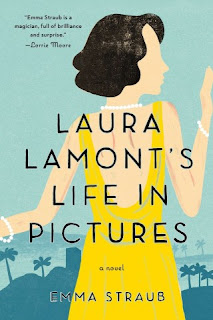 Hollywood movie and a little like F. Scott Fitzgerald’s “The Great Gatsby.”

The novel begins in Wisconsin in 1929 with Elsa Emerson, her family, and their backyard theatre. When she’s a teenager, a tragedy compels Elsa to leave home and pursue the acting career her deceased sister Hildy would have had.

Soon after arriving in Hollywood, Elsa ditches her old name and becomes Laura Lamont. Soon after that, she divorces her first husband and marries the love of her life. The novel spans five decades, two marriages, three children, and a career that rises and falls. It holds all of the things a well-lived life holds: humor and loss, success and failure, birth and death, happiness and regret.

This is the story of a small-town nobody who becomes a Hollywood icon and then a has-been. It’s about the life we leave behind in pursuit of something better, and it’s about the people we hurt even when we don’t mean to. It’s about being humbled and finding peace. It’s not a surprising, breath-stealing novel, but one with a rather quiet presence. It’s the kind of book you can escape into, the kind that carries you away.

Posted by The Windham Eagle at 3:50 PM