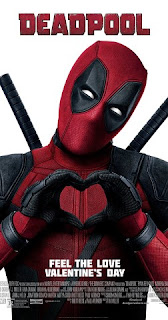 So, we all know Marvel produces amazing movies like “Thor”, “Avengers”, “Iron Man”, “Hulk” and so on and so on. These are all movies that you would take your family to see and the kids would cheer and laugh, wishing they were these amazing superheroes.

Let me be the first to warn you, “Deadpool 2” is not a family movie! Take it from me, I tried to take my teenage daughter to “Deadpool 1” and quickly changed theaters.  PARENT ALERT! This movie has extreme language, violence and sexual innuendos.  It is no place for kids!

Now that the family warnings are over, here is a little hint of what you will see if you are of age.  The who is a burn victim with a bad attitude. He tells the worst jokes whose superpower is superfast healing, which makes him indestructible.
movie is a continuation of “Deadpool 1” with the main character Wade Wilson aka Deadpool (Ryan Reynolds)

Deadpool, besides having the worst potty mouth in history is your average superhero, NOT!  Not only is Deadpool a lone wolf but his moral compass does not point north.  This movie shows him killing people by very graphic means.

This film is not without its comedy though. If you can get past the blood, drugs, sexual innuendos, violence and language in every sentence you will find that there are a lot of pop culture refences throughout the movie. The movie also has a lot of message hidden within it. The story does promote teamwork, collaboration, love and empathy.

The adults in the room will also see that people, particularly kids, can change throughout life by how they are affected by others and their environment.

“Deadpool 2” is one of those movies that you find yourself laughing hysterically, but at the end of the movie the message really hits you on how you treat others affects their life choices. The main message of the movie is to treat people with kindness because you do not know how they will personally be affected.

Posted by The Windham Eagle at 9:17 AM No comments:

Book Review: “Here if You Need Me”. Reviewed by Jennifer Dupree 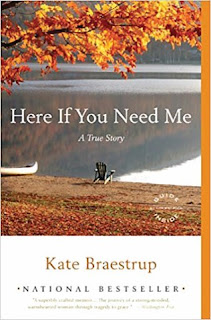 Kate Braestrup’s memoir, “Here if You Need Me”, is beautiful and tender, funny and sad, sweet but not cloying. Kate’s husband was a Maine State Trooper who was killed in a car accident when their youngest child was just 10. Widowed with four children, Braestrup decides to carry on with her husband’s dream of becoming a Unitarian minister. Once ordained, she begins working as the Chaplain of the Maine Warden Service, something she knows almost nothing about until she becomes their Reverend.

The book opens with the story of a six-year-old girl lost in the woods. The reader stands with Braestrup as she stands with the terrified parents, waiting, cold and afraid. When the parents tell her they don’t believe in God, Kate reassures them that she’s merely there to wait with them. There’s something tremendously tender in that waiting.

The rest of the book unfurls like a sheaf of papers, one story after the other, loosely connected, not in any strict order. And yet, because of Braestrup’s easy and confident tone, I felt secure in the journey on which she was leading me.

This is not merely a sad story. At times, Braestrup is hilariously self-deprecating. She’s funny and sweet about her kids. She has excellent timing with jokes, anecdotes, and quips surrounding her beloved game wardens. But, she’s also generous with her life observations, her biblical interpretations, and her patient belief in the human spirit.

This is a story about faith - what it means to have faith and be faithful. Braestrup’s version of religion lies more in the goodness of people than in any divine being (although she clearly acknowledges and believes in a higher being). This is a story about grief, and the capacity for the human heart to go on. It’s an acknowledgement of the frailty of life, and the risk we take by engaging in it. Braestrup writes with such humanity that readers will be hard-pressed to leave this book without feeling something like hope.

Posted by The Windham Eagle at 6:24 AM No comments: 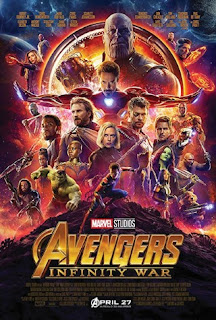 It has been ten years since “Iron Man” hit theaters and now the Marvel Cinematic Universe has released their nineteenth installment and most massive project to date, “Infinity War.” Directed by Anthony and Joe Russo (“Captain America: The Winter Soldier,” “Captain America: Civil War”) this modern epic boasts a giant cast featuring just about every hero from the franchise thus far. Robert Downey Jr., Chris Evans, Chris Hemsworth, Benedict Cumberbatch, Scarlett Johansson, Chadwick Boseman, Chris Pratt and Zoe Saldana are just a snapshot of A-listers that come together here in what is undeniably one of the most anticipated films ever made.

As explained during earlier Marvel chapters, the mighty, purple titan Thanos (Josh Brolin) has been working to acquire and complete the “Infinity Gauntlet,” a golden glove designed to harness the power of the six Infinity Stones. Each stone represents and wields an essential component of life (mind, time, power, space, reality, and soul). When brought together with the gauntlet, the wearer can essentially do anything they want by controlling all elements of the known universe. Now it is up to the Avengers and some new allies to band together and prevent Thanos from completing his devastating mission.

To no surprise, the sheer entertainment factor of this monumental movie is well worth the ticket price alone; I simply expected nothing less from Marvel this time around. “Infinity War” brilliantly paces unbelievable battle sequences that feel strikingly realistic, while incorporating their signature humor to humanize the larger story. This is something audiences have become accustomed to over the years as the studio continuously cements box office dominance. That being said, there are more moving pieces than ever before in this intense plot and the Russo brothers truly deserve a whole lot of credit for pulling off such a complicated balancing act. Simply put, seemingly every hero involved gets their fair chance to shine, yet that still isn’t what impressed me most about the film.

What sets “Infinity War” apart from just about any other superhero movie is the incredible intrigue of its menacing villain, Thanos and the haunting explanations of his character’s motivations. By understanding his perspective so thoroughly, with plenty of meaningful screen time, Marvel has delivered the most legitimate threat of this giant story and the strongest form of conflict yet. The end result is an epic piece of visual entertainment with an emotionally powerful story to match. Don’t allow yourself to miss out on “Infinity War,” this is a surefire instant classic that I have no problem praising as one of, if not the greatest comic book film of all time.

Posted by The Windham Eagle at 9:05 AM No comments:

Comedy
Rated PG-13
1 hour 50 minutes
Feeling the need for a bit of comedic relief, I spent a rainy Sunday afternoon in the theater this past 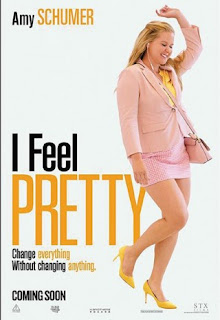 Directed and written by Abby Kohn and Marc Silverstein of the “He’s Just Not That Into You” fame, the movie features Schumer as Renee Bennet as well as Rory Scovel as Ethan (her love interest) and Michelle Williams as Avery LeClaire (her boss at a cosmetic company).

“I Feel Pretty” is the story of Renee, who struggles with insecurity over her appearance. She works in a basement office managing a website for an upscale cosmetic company (LeClaire). She declines to apply for a receptionist position for that company after reading the job description's emphasis on being the beautiful "face" of LeClaire.

One night, she makes a wish to be beautiful. The next day, while she is exercising in her evening spin-class, she experiences a humiliating accident where she falls off the stationery bike. The fall causes a major “head-knock” on the floor, and as a result, Renee suddenly believes that she’s been upgraded to a flawless super-beauty.

The only thing that’s changed is how she sees herself. No physical change has taken place. Her new viewpoint puzzles others as she begins acting like a world-class diva, mistaking construction-workers’ whistles and fun banter with complete strangers as proof of just how “hot” she has become.
When I watched the previews of this movie, I remembered the 1999 comedy, “Shallow Hal” (staring Gwyneth Paltrow and Jack Black). I enjoyed that film and laughed through a majority of the lighthearted but spot-on-way we, as a society, view the beauty of women. I wondered if this comedy would mimic the “Shallow Hal” slant in some way.

It did. The difference was that in “Shallow Hal,” the changed perception was in the man’s view of a woman’s beauty. This film presented it from the woman’s point of view.

However, I must admit that I didn’t find this movie quite as funny as “Shallow Hal.” However, it must be noted that in 1999, I was almost 20 years younger than I am now. That may have an impact on what I find funny in the present moment when it comes to the true beauty of women.
I found the movie both irritating and amusing. Irritating because we haven’t progressed much in terms of what we identify as women’s beauty. Amusing because we are still human – and are really messy about how we go about living life. The movie does a great job reflecting that.

Posted by The Windham Eagle at 8:29 AM No comments: