The fact that this movie won seven Oscars (including Best Picture), along with other Golden Globes, BAFTA and SAG awards, scares me a bit. If this movie represents good movie making, then I am fearful of what the future of movies will look like for us.

In the interest of being as positive as possible, let me offer up the best three things about this movie: 1. It ended. 2. Woody Harrelson’s portrayal of Chief Willoughby was honest, and he was into his character. 3. The same can be said for Francis McDormand’s portrayal of Mildred Hayes. 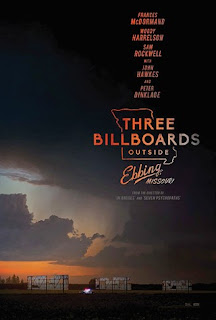 I found Sam Rockwell’s performance of Officer Dixon to be a resurrection of his character Wild Bill in “The Green Mile”. I guess if that’s what they wanted from him, he too delivered. And since we don’t like the person he was portraying (really, who could?) he did his job well. Maybe we can feel sorry for this guy, but he hasn’t earned the right to be liked yet.

I do want to be clear that any negative comments here about this movie, in no way diminish the respect I have for the pain suffered by the real family that this story is based on. I can only imagine their anger, frustration and pain; and in my book the real family can put up all the billboards they want to in order to work through their agony.

This movie is dark. Not the kind of dark you can recognize right up front and choose as a dark movie; it sort of oozes in like black silt. It slowly encroaches and settles over you like heavy smog.

You are unaware and then suddenly you find yourself unable to breathe…slouching in your seat…waiting desperately for something good to happen…anything at all, so you can breathe again.

Somebody please say or do something that remotely resembles a happy word or thought - please! But no; there is not one person that we meet in this whole town that is not filled with despair, discouragement and/or various other types of emotional baggage, so debilitating that none of them seems able to function.

This town is full of them. (This one easily could have been named “Walking Dead - The Movie”.) Not one person has an ounce of hope at any level. There is only a glimmer of gray in the last two minutes of the movie. I can’t even say there’s a glimmer of light in this last scene, because there isn’t a drop of light to be seen in this picture anywhere. Gray is the best I can offer and only at the end, and only for a couple minutes.

The rest of this movie experience is dripping with hopelessness and I don’t get why. I don’t know what this widespread desperation adds to the story-telling of what the real family had to endure. I realize some call this black tone entertaining; I personally do not.

The movie is unrealistic is so many ways. Seriously, in the modern world where would folks get away with so many, consistent and violent acts when everyone knows who did them? Police stations being torched, holes drilled into the local dentist’s thumb, a police officer tossing a man out a window in broad daylight (right on main street for all to see), and let’s not forget the racial verbalizations that are a constant throughout the movie; covering, among other things, people of color and dwarfs.

The entire town, from its residents to the police force, is so dysfunctional that no one seems to care. All these acts are completely ignored with no reactions from the townspeople; no one seems to have to account for their actions or words; and everyone just goes on being their usual hopeless, despondent, unreactive and disparaging selves. (“Walking Dead”?  Hmm . . . ?) All this happens in our society, when if folks even use a word that’s not politically correct we are judged harshly; complete with raised eyebrows and hushed tones. And if anyone commits an evil act, they are plastered all over the media streams within the hour; and have their spotlight on the six-o-clock news.


Typically I’m very tuned in to the music in movies. Usually the music has the power to transport or be so powerful it almost seems like another character in the movie. However, I was not even aware there was music in this movie. I was so sucked into the mire of this town’s depressive fog, which permeated the very air; I never heard a note! I was too busy trying to breathe a normal breath to hear any music. I just wanted this thing to end. They truly could have done a much nicer job at paying respects to the family that has to live through their loss.
Posted by The Windham Eagle at 7:21 AM