Movie Review of “The Post” (PG-13) - Reviewed by Lorraine Glowczak


If you haven’t had a chance to see “The Post”, starring Meryl Streep (as publisher, Katharine Graham) and Tom Hanks (as editor, Ben Bradlee) you must put this on your movie list now.


Even though we know the outcome, the suspense and drama keep the viewers on the edge of their seats as Bradlee and Graham decide to publish portions of the Pentagon Papers, a classified report that described America’s involvement with Southeast Asia through four presidents. 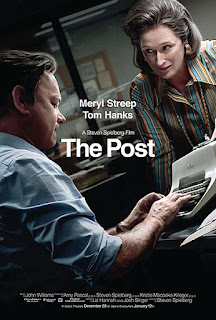 Director, Steven Spielberg, captured elegantly, the resentment between the government and the media during the early 1970s.

Set in 1971, the film’s story begins with Daniel Ellsberg (Matthew Rys), a Marine who documents the progress of the U.S. military on a trip to Vietnam. Upon his return flight to the U.S., he reports to the Secretary of Defense, Robert McNamara (Bruce Greenwood) that the war in Vietnam is hopeless. When McNamara makes a statement to the press announcing that all is going well, Ellsberg becomes disappointed and disillusioned. This is where the tide turns.

Becoming a government researcher,Ellsberg makes copies of the papers; giving them to The New York Times who prints them. In doing so, the Times is then accused of violating the Espionage Act and they are ordered to stop publishing for a week. In comes The Post and the thrilling drama that escalates.

The Post, which had been publishing rewrites of The Times’ articles, began running its own excerpts, becoming part of a Supreme Court showdown over the First Amendment.

In addition to highlighting a critical time in American military history and society’s response to it, “The Post” also weighs in on what it is like to be a woman in a position of power during the early 1970s.

Pushed into the career of publisher in her mid-40’s because of the suicide of her husband (who inherited the business from her father), Graham is timid and doesn’t trust her own judgement, despite the fact she is intelligent and is business savvy. But her confidence grows throughout the film, despite the lack of support in making a decision that could collapse a family business and/or send her and others to jail.

“The Post” is not only entertaining but captures historical details with accuracy and depth.