“Django Unchained” is a 2012 western film and the seventh full length feature from director/writer Quentin Tarantino. While “Kill Bill” included some elements of the “spaghetti westerns,” this marked Tarantino’s first time completely delving into the genre. The movie pays particular reference to Sergio Corbucci’s 1966 film, “Django” and includes a cameo appearance from Franco Nero, who played the titular character. “Django Unchained” went on to become Tarantino’s most financially successful film, raking in over $425 million at the global box office, according to Box Office Mojo. It also won him a second Academy Award for Best Writing following 1994s “Pulp Fiction,” in addition to yet another Best Supporting Actor victory for Christoph Waltz, who also achieved the feat for his performance in 2009’s “Inglourious Basterds.” 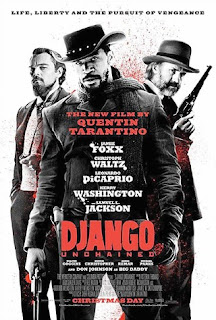 In “Django Unchained”, Jamie Foxx plays a former slave named Django who is freed by a German bounty hunter, Dr. King Schultz (Waltz). The two quickly form an alliance as a bounty hunting team; starting off by setting out to find and kill three slavers known as the Brittle Brothers. Eventually, their journey leads them to Candyland, another slave plantation owned and operated by the ruthless Calvin Candie (Leonardo DiCaprio). Django and Schultz learned that Django’s wife Broomhilda (Kerry Washington) was sold to Candie, so they come up with a plan to try to rescue her from the plantation.

This western fits right in with the rest of Tarantino’s filmography, handling its serious subject matter with an incredibly controversial blend of humor and extreme violence.

Personally, this lighthearted approach does not bother me at all and I think the result remains Quentin Tarantino’s most enjoyable movie. It is clear to me that he and everyone else involved in the project had a great time working on “Django Unchained”; which is highlighted by Leonardo DiCaprio’s incredible energy in his unnatural role as a villain. He was absolutely electric, completely stealing the show during the Candyland sequence. While Waltz was great too, I think that this remains DiCaprio’s best work to date and he would have earned the Oscar had he been granted a bit more screen time.

That aside, Foxx’s lead performance also cannot go unnoticed here, as he was totally bad-ass, playing a man who will stop at nothing to save the woman he loves. Overall, “Django Unchained” provides a perfectly acted and exciting story that stands amongst my absolute favorite movies. Watch out for my updated thoughts on Tarantino’s latest film, “The Hateful Eight” (2015) as I finish this tour of the director’s work.

Posted by The Windham Eagle at 8:11 AM