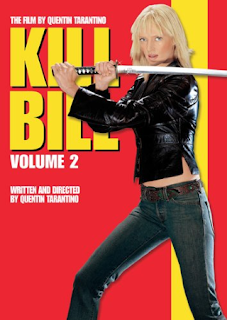 Following the release of “Kill Bill: Vol. 1” in October of 2003, the second part of Quentin Tarantino’s twisted samurai story hit theaters on April 16, 2004, in the form of “Kill Bill: Vol. 2”. As mentioned before, the acclaimed director considers the combination of the volumes as one cohesive story that makes up his fourth feature film. “Vol. 2” contains most of the previous cast highlighted by Uma Thurman’s reprisal of The Bride. While “Bill” has a few speaking lines in “Vol. 1,” it is worthy to note that David Carradine finally, fully appears as the titular character here. On top of that, we also see a lot more of his brother, Budd (Michael Madsen) and even a brief scene featuring another Tarantino favorite, Samuel L. Jackson.

Early in “Vol. 2”, there is a flashback sequence depicting Bill and the Deadly Viper Assassination Group killing all of the participants of The Bride’s wedding rehearsal. Following this recap, The Bride picks up right where she left off and continues her quest of vengeance to destroy her former team, especially Bill, the ex-lover that betrayed her. She eliminated two of the Vipers in “Vol. 1” and has two more to take care of before she finally comes to face to face with Bill himself.

As Tarantino does, I also view “Kill Bill” as one long, epic story. That being said, there is a clear difference between each half of the director’s passion project. While “Kill Bill: Vol. 1” sets all of the groundwork for the plot, it is definitely much more of an action movie; something that Tarantino hadn’t quite dealt with up to that point. On the other hand, “Vol. 2” is a return to his roots of sorts, as it is much heavier on the writing and dialogue. In my opinion, each part of the film is a masterpiece for what it is intended to be.

There is truly some brilliant screenwriting on display in “Kill Bill: Vol. 2”, particularly in the long-awaited meeting between The Bride and Bill. Uma Thurman and David Carradine deliver some tremendous performances here and I really think that they deserved more recognition than a pair of Golden Globe nominations. Their confrontation is set up to be yet another epic samurai sword fight; an idea that the two characters even discuss amongst themselves. However, largely due to the situational circumstances, it becomes a battle of words instead. Luckily that is Tarantino’s specialty and he delivered a script even more intense than the blood-bathed battles that preceded this long meeting. In the end, “Kill Bill: Vol. 2” forms a near perfect conclusion to a fantastic story that can’t afford to be missed. My review of “Death Proof” (2007) will be on the way soon, as we work our way into the second half of Tarantino’s filmography.

Posted by The Windham Eagle at 8:25 AM