Coming off the tremendous success of 1992’s “Reservoir Dogs” and 1994’s “Pulp Fiction”, writer/director Quentin Tarantino certainly had a lot to live up to with his third full length feature. 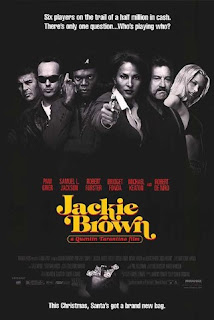 Based on Elmore Leonard’s novel, “Rum Punch”, “Jackie Brown” was released on Christmas of 1997 and remains the only time when Tarantino has adapted someone else’s original work. With the exception of “Death Proof” (2007), this is also the only film from the legendary director I had missed prior to this chronological marathon of his work. While it may not be his most iconic project, it has seemed to gain a cult following over the years and I can confidently say that my initial viewing of this film has been long overdue.


“Jackie Brown” is yet another gangster story from Tarantino; this time revolving around criminals who get caught up in a mess of lying to and crossing each other. The title character (Pam Grier) is a stewardess working for an airline that flies from Los Angeles to Mexico. She is involved in smuggling money for a weapons dealer named Ordell Robbie, who is brought to life brilliantly by a ponytailed Samuel L Jackson. Eventually, a pair of government agents portrayed by Michael Keaton and Michael Bowen, start to figure out what’s going on. A few other players become tied up in this game, including a bail bondsman (Robert Forster), a bank robber (Robert DeNiro), and a beach girl (Bridget Fonda).

While that summary is brief, “Jackie Brown” is so full of twists and turns that any more information would ruin the exciting plot. That being said, the all-star cast and unique characters they play is enough to show that this is a whole lot of fun, fueled by snappy dialogue and clever humor. There is also a very clear 1970s feel to the entire movie due to elements such as the costume design and soundtrack choices.

Aside from those Tarantino trademarks, there are a few things that make “Jackie Brown” feel different from the rest of his movies. First, there is very little violence in comparison to the bloodbaths that define all of his other work. It is also worth noting that up until the end, the story is pretty much told in order, unlike the nonlinear form that he tends to go for. Finally, I would add that the plot takes a pretty long time to develop, but the payoff is well worth it by the time the credits roll. Overall, “Jackie Brown” is a bit different than most Tarantino movies, but does more than hold its own against the rest of his filmography. Give this underrated crime drama a well-deserved watch on Netflix and keep an eye out for reviews of the separate volumes of Tarantino’s fourth major project, “Kill Bill”.
Posted by The Windham Eagle at 6:20 AM