With Halloween right around the corner, you might want to find the ideal scary movie. Here are my top horror movie picks to make you scream and jump out of your chair.

“The Texas Chainsaw Massacre” - 2003 Remake
It centers around five friends on their way to a concert and opens with the narrator saying, “For them, an idyllic summer afternoon became a nightmare.” The dirty scenery and strange behaviors of the characters are what make this a notable horror movie. Beware: this is a very gory movie. 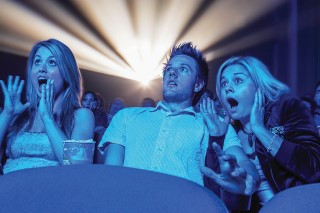 On their way to the concert, they pick up an unusual hitchhiker and things go from bad to weird to worse. The group separates while trying to get help and eventually run into Leatherface and from there their situations deteriorate. I thought the acting was pretty good - not great, but you kind of believe these characters are really running for their lives.

“The Strangers” - 2008
The movie opens claiming it was inspired by true events. Now, whether this is actually true or not, I do not know; believing that it is makes this thriller much better. What I really like about this movie is its creepiness and unpredictability. It’s very unsettling, which makes for an excellent horror movie.

A couple is heading back to a family cottage after a failed marriage proposal. James (Scott Speedman) and his girlfriend, Kristen (Liv Tyler) are despondent after things have not gone as planned. Shortly after they arrive home weird visitors and loud banging on the cottage walls make them fear for their lives. “The Strangers” features a lot of moments that will make your heart pound and may cause you to jump. It’s important to pay attention, because some of these moments are very subtle. An all-around fantastic thriller.

“The Conjuring” - 2013
I saw this in the theater and it is one of the few movies that made me jump while watching it. This movie also states it’s based on a true story, and it is. Ed (Patrick Wilson) and Lorraine (Vera Farmiga) are real people who were involved in this case. They seek to educate others, while removing unwanted spirits.

A family moves into a new house and strange things start happening. I know that’s vague, but part of what makes this movie so good are the events that happen in and around the house. You never know when the next scare is coming. For maximum effect, watch with the lights out.

“The Exorcist” - 1973
Years ago, I tried to watch this for the first time. It was late at night and I had to turn it off part way through because I was scared. The scariest aspect of this movie is that it seems vaguely plausible. A little girl (Linda Blair) begins acting weird, then gets sick, then claims she is the Devil and strange things happen in her presence (doors and windows slamming automatically, floating furniture, mysterious cuts appearing on the child’s legs). From there, more weird and even more disturbing things happen around her. For 1973, this movie has amazing special effects and great movie makeup.

I think this is as close as you’ll get to a perfect horror movie. For maximum effect, watch this one with the lights out too . . . If you dare . . .

Posted by The Windham Eagle at 8:19 AM No comments:


I recently read an interesting book named “The Hidden Life of Trees", by Peter Wohlleben. This book looks at trees and forests in a totally non-traditional way. 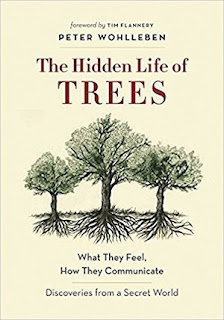 The author contends that trees feel and that they intentionally work together and even communicate with one another. He dives into deep detail, regarding the hidden and inner workings of the forest, from how trees manage water (and the lack thereof) and their “pecking order” to how and why trees take root where they do.

Wohlleben stresses the importance of maintaining old-growth forests over working forests.
Much of the information is based on European forests, which apparently contain a lot of beech trees, but there are also many references to the forests of the United States.

Being a “tree guy”, I found this to be a very interesting book. I don’t necessarily agree with everything I read, but it has given me a lot to think about. I tried to keep an open mind throughout the book and consider the possibilities.

For the moment, I’m seeing trees and forests in a different light. Who knows? Maybe Wohlleben really knows what he’s talking about. Who am I to say he’s wrong.

I suggest that you read the book and decide for yourself.

The author is general manager of Q-Team Tree Service in Naples and is also a licensed Arborist. He can be reached at RobertFogg@Q-Team.com or 207-693-3831.

Posted by The Windham Eagle at 6:54 AM No comments:


Thirty-five years after the release of the original “Blade Runner” movie comes its long awaited sequel, “2049”. The 1982 science fiction, cult classic has grown on me as of late. But it is worth noting that 2007’s “The Final Cut” is the only one of the seven versions of the film I have seen.

Apparently, director Ridley Scott made fairly significant changes upon each edit, but “The Final Cut” 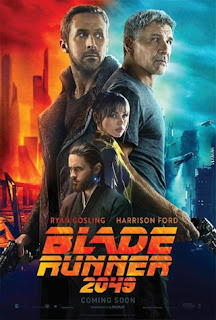 is widely regarded as the definitive version; I would highly recommend giving it a watch before checking out this new movie.

Scott returned in the role of an executive producer this time around, with acclaimed director Denis Villeneuve (“Prisoners” and “Arrival”) taking over the helm. Harrison Ford once again portrays Rick Deckard, highlighting a handful of cast members who reprised their roles from the original film.

“Blade Runner 2049” takes place thirty years after the events of its predecessor and is once again set in the city of Los Angeles. The area remains a crowded, dreary place in this dystopian world, defined by industry and “replicants”. Designed to look like humans, replicants are pretty much androids, primarily used for manual labor in this dark vision of the future. During the first film, all replicants were outlawed on Earth due to their violent nature, and it was Rick Deckard's job as a “Blade Runner” to eliminate them. This time around, Ryan Gosling plays LAPD Officer K, who assumes the same position thirty years later. However, the times have changed, and K is a replicant himself who is responsible for killing older, outlawed models of his own kind. Eventually, K uncovers a shocking secret that traces back to Deckard - forcing him out of hiding.

Thankfully, “Blade Runner 2049” isn’t quite like the countless other sequels and reboots that Hollywood has been dishing out during the past decade or so. It actually functions well in supplementing, and more importantly - building upon, the source material of its predecessor.

Gosling adds another excellent performance to his impressive résumé here, carrying the audience through the visually stunning depiction of this already rich universe. Harrison Ford did a great job as well, and I think it was a very wise, storytelling decision to save Rick Deckard’s screen presence for the dramatic last act of the film. The only other thing I could ask out of “Blade Runner 2049” is more viewings to unravel its thematically deep and heavily layered story. Any fan of the original, science fiction films, or movies in general should check this one out; it may very well be a classic in 2049.
Posted by The Windham Eagle at 4:47 PM No comments: