A movie review of the 1993 crime drama, "True Romance" by Daniel Kilgallon


“True Romance” is a 1993 crime drama directed by Tony Scott (“Top Gun”) and written by legendary director/writer Quentin Tarantino as his first full length screenplay. He was coming off a groundbreaking directorial debut with “Reservoir Dogs”, and went on to write and direct “Pulp Fiction” just a year later. As a giant fan of all of his movies, it was really cool to finally see “True Romance” - as his writing alone made it feel like any other Tarantino film. His sharp screenplay was as unique and entertaining as most of his other work, without a single line of dialogue being wasted or boring. Stars Christian Slater and Patricia Arquette did a great job of bringing the script to life, alongside a standout supporting cast featuring Dennis Hopper, Val Kilmer, Gary Oldman, Brad Pitt, Christopher Walken, and the late James Gandolfini.

The first act of “True Romance” consists of an unconventional love story in Detroit between a movie nerd named Clarence Worley (Christian Slater) and a call-girl by the name of Alabama Whitman (Patricia Arquette). Eventually, the two accidentally come across a suitcase full of cocaine and run away to California in order to make some money with it. It doesn’t take long for the Sicilian Mafia to figure who stole their drugs and set out on a mission to get them back. 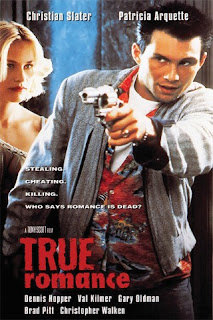 The storyline of this movie may seem somewhat straightforward or even cliché, but the buildup to get there is anything but that. While it is a little bit quirky at times, “True Romance” provides a completely original plot fueled by witty, amusing dialogue. In fact, my favorite parts of the film were the character building moments delivered by all of the brilliant actors in minor roles. Slater and Arquette did a good job of carrying this movie, but I personally think that the supporting cast was even better. For example, Gary Oldman was practically unrecognizable in his wild role as a wannabee gangster pimp and Christopher Walken delivers some of his finest moments ever as a lead mob boss in a dialogue with a former cop played by Dennis Hopper.

Any of the elements mentioned above are enough to cement this as a classic of Tarantino writing, but all of the over-the-top violence throughout, makes it seem like he actually directed the movie. Putting aside a few choppy storytelling decisions and an ending that I thought could have been a little better, “True Romance” is still a quality, underrated film that shouldn’t be missed by Tarantino junkies or movie fans in general.