"War for the Planet of the Apes” is a new science fiction film and the third installment in the “Planet of the Apes” reboot series following 2011’s “Rise” and 2014’s “Dawn.” I really enjoyed both of those movies, but especially “Dawn” for building upon the first movie in a big way, through more serious storytelling and intense action sequences. Between that and some awesome looking trailers, I couldn’t wait to see if “War” would live up to my high expectations and complete a potentially excellent science fiction film trilogy. 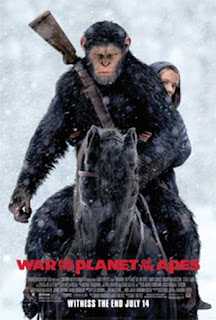 Ever since the battle from “Dawn”, the highly intelligent chimpanzee Caesar (Andy Serkis) and his society of apes, have continued to live in the woods, sheltered in a hideout designed to protect them from humans.

Early on in this movie, they are once again attacked by military forces, this time led by a ruthless colonel (Woody Harrelson). After attempting to make peace with the humans, Caesar decides to take matters into his own hands as he sets out on path of vengeance, resulting in emotional and psychological warfare between the conflicting species.

The creators behind the stunningly realistic universe of this trilogy, easily could have put together an epic, exciting action movie that is on par with any other blockbuster out there and left it at that. While this movie is certainly epic and contains exciting action scenes for sure, it is clearly more of a dramatic film experience overall. There are so many emotional moments packed into the movie, making the story far more impactful and the action that much more important. On top of that, there is tons of World War imagery throughout the movie that takes “War for the Planet of the Apes” to a whole new level thematically.

In order to make this dramatic three act narrative come together, the apes really needed to be humanized more than ever this time around. Andy Serkis played an absolutely vital role in making that happen and his incredible motion capture work as Caesar is once again worthy of an Oscar nomination. Meanwhile, Woody Harrelson delivers an excellent performance too, providing a dark and intriguing antagonist to counteract our beloved hero. After a first viewing, I can easily say that “War for the Planet of the Apes” is the best movie of the summer and one of the finest science fiction films I have seen in a long time. I cannot wait to re-watch the greatest installment of what has become one of my absolute favorite trilogies.

Posted by The Windham Eagle at 6:22 AM