"Wonder Woman” follows the “Man of Steel”, “Batman v Superman”, and “Suicide Squad” as the fourth installment in the DC Extended Universe. While the same incarnation of the character made an appearance in “Batman v. Superman”, this marks the first full length film adaption for the quintessential female superhero. 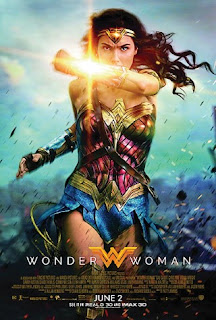 I have honestly enjoyed the first three movies in this DC franchise thus far, but most critics have not felt the same, to say the least. Because of that, “Wonder Woman” certainly had high expectations to keep this cinematic universe afloat, before they bring it all together when “Justice League” comes out in November.

Diana (Gal Gadot) is the princess of an Amazonian region called Themyscira, an island inhabited and protected by a society of female warriors. One day, an undercover American pilot named Steve Trevor (Chris Pine), crash lands on their shores and is rescued by Diana. She soon informs her people that the rest of the planet is in the midst of the First World War. Diana quickly decides to leave her homeland and fight alongside Trevor in the hope of ending the global conflict. She assumes the identity of Diana Prince, as she discovers her true powers and uncovers her ultimate destiny - becoming Wonder Woman, a true goddess amongst men.

When Wonder Woman came to save the day in “Batman v. Superman”, I had no doubt about Gal Gadot’s ability to play this iconic character and she totally owned the role once again in this well-deserved standalone movie. Gadot added a whole new dynamic to her performance by portraying Wonder Woman’s courage and curiosity as she became integrated to the real world throughout the movie. This was a near perfect depiction of the character and I can’t wait to see what else Wonder Woman will bring to the screen in “Justice League.”

The first act of “Wonder Woman” paints an excellent origin story and if anything, I wish that the film spent even more time in the paradise-esque setting of Themyscira. Luckily, it was just as entertaining to watch Wonder Woman dominate the battles during the breathtaking World War I fight sequences.
My only complaint with this movie is that it contains some issues with choppy storytelling and a last act that featured an average antagonist at best. That aside, “Wonder Woman” is an outstanding comic book film that holds up with the best of the genre in recent years. While this milestone movie will rightfully appeal to women all around the world, I think “Wonder Woman” can truly be enjoyed by all audiences.

Posted by The Windham Eagle at 7:09 AM