Movie review of "Pirates of the Caribbean: Dead Men Tell No Tales" by Daniel Kilgallon


Nearly fourteen years ago, a movie based on a Disney theme park attraction hit theaters and unexpectedly brought the concept of a summer blockbuster back to life. “Pirates of the Caribbean: The Curse of the Black Pearl” was an instant success and gave us one the most iconic film characters of the decade in Captain Jack Sparrow. It spawned an extremely profitable franchise and now, Johnny Depp is back for the fifth installment, “Dead Men Tell No Tales.” 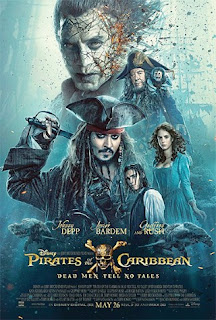 This time around, Captain Jack Sparrow embarks on a quest to find the magical trident of Poseidon, a tool with the power to control the entire sea. Along the way, he encounters an enemy from his past named Captain Salazar (Javier Bardem). Salazar leads a crew of undead sailors who intend to rid the ocean of pirates, with Sparrow as their number one target.

When “On Stranger Tides” came out in 2011, I was pretty disappointed by the film’s overall story and heavy reliance on recycled jokes from the three previous installments. I honestly had low expectations for the fifth chapter because of that, but still hoped that it could bring this diminishing franchise back to life again.

“Dead Men Tell No Tales” is not a perfect movie, but it is definitely an improvement on its underwhelming predecessor. Johnny Depp yet again delivers a great performance, but surprisingly, this didn’t turn into the Captain Jack show as much as it has in the past few movies. This film offers enough supporting characters to supplement Depp’s performance and they all have truly interesting ties to the rest of the franchise. Javier Bardem (“No Country for Old Men”, “Skyfall”) brings another awesome villain role to the big screen; and his character of Captain Salazar has motivation that is actually meaningful to the story.

While “Dead Men Tell No Tales” is a satisfying chapter in the “Pirates” saga, it is not without its flaws. The film’s action scenes are all pretty exciting, but too over the top for its own good at times. There's also a lot going on at once; a few subplots definitely could have been eliminated to make the story flow better. However, I give this movie a lot of credit for improving on that forgettable film from six years ago. It seems like the franchise has set itself up for one more chance to end on a high note with a sixth and (hopefully) final installment; make sure you sit through the credits of this one.