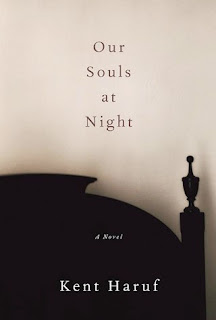 Ever since I read “Plainsong,” I’ve been a fan of Kent Haruf. “Plainsong” is a novel that has stayed with me for nearly twenty years; in part because of its no-nonsense prose, its sweeping landscape - but also because of Haruf’s control as a writer and because of his tenderness toward his characters.

Haruf died in 2014, but just before his death he finished “Our Souls at Night,” which is his finest novel. With writing so spare it leaves no room for equivocation, Haruf fully renders the lives of Addie Moore and Louis Waters, seventy-ish neighbors, who fall upon an unexpected friendship. Just as Haruf uses the Colorado towns he grew up in as landscape for his novels (particularly his trilogy of “Plainsong,” “Eventide,” and “Benediction”) he also uses the landscape of his second marriage as material for his final novel.

Addie and Louis, both divorced and lonely, find solace in each other in an unusual and touching way. These are people you will want to spend time with; people you will root for and people you will love. This is not a whiz-bang novel. It’s a slow, quiet opening of friendship that will grab you by the heart and not let go.

Haruf was born with a cleft lip and, as he says in an essay, he “learned to live completely inwardly.” It is that self-containment that makes Haruf such an astute observer of life.

After you’ve picked up your copy of “Our Souls at Night,” stop by the Children’s Room at the Windham Public Library on Wednesday, July 12 from 2 p.m. to 3 p.m. to Skype with author Maryrose Wood (“The Incorrigible Children of Ashton Place,” “The Long Lost Home” and more).
Read the books ahead of time and bring your questions!
Posted by The Windham Eagle at 5:40 AM