Goldie Hawn and Amy Schumer have good chemistry and make their mother/daughter relationship believable. That’s the highlight of this movie. Amy plays Emily, the daughter, who has lost her job and her boyfriend at about the same time. Goldie, of course plays the mom, who will do anything to spend more time with her screw-up daughter. 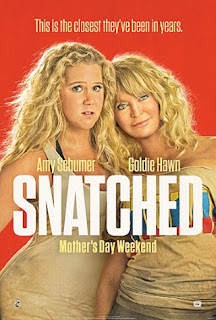 Emily had purchased non-refundable tickets for herself and the now estranged boyfriend, for a trip to Ecuador. Yes, of course mom gets to go instead.

My feeling was that “Snatched” is a cross between a female version of “Indiana Jones” and “The Heat” (but not in a good way). I came out of the theater saying exactly that; not knowing at the time that, “The Heat” and “Snatched” have the same screenwriter (Katie Dippold).

“The Heat”, I loved.  Not so much this one. This movie is rated R for its sexual content and language. I didn’t feel any of the language or nude scenes added a thing to the film. I felt like those factors were tossed in to help sell this thing. I couldn’t shake the feeling that Amy Schumer’s technique /style of acting are very much Melissa McCarthy-like. This is not a bad thing or a good thing. It is just my observation.

We haven’t seen Goldie Hawn in a movie since 2002 when she starred in, “The Banger Sisters”. It is too bad this iconic, comedic actress chose this movie for her “come back”.  The up side to the movie is: The movie-goer can escape from real-life and literally have a chuckle or two with the girls. That is the best I can say. No real meat here, but of course, that was the intention. It does have it all: action, comedy and drama. The down side is: There are only tiny degrees of real quality to the action, comedy and drama. None of those qualities were consistently strong throughout the movie. Most of the actors either over-acted or under-acted; performances were not fantastic.

Writing was not fantastic. In places I felt it was rather juvenile. You’ll know them when you see them. My favorite character and favorite performance was Ike Barinholtz, who played Schumer’s needy, nerdy brother, Jeffrey. Ike owned the character. I totally believed him in every one of his scenes. He made me forget I was watching a movie - during those scenes only. Which is how I basically judge movies: If I am lost in them and I am unaware that I’m watching a movie and I feel transported to another time or place - it’s awesome! If I’m constantly aware of the fact that I’m watching a movie and/or I am aware of the time during the movie, it’s not good. I was not transported and it felt longer than the 90 minutes. We have all experienced movies that were close to 3 hours long but flew by like an hour. This is not the case here.

The strongest acting and most believable scenes for Hawn and Schumer were when they were interacting as mother and daughter. Overall it is a very light piece of entertainment that some folks may enjoy, for the sole purpose of getting away from real life and escaping for 90 minutes.

Posted by The Windham Eagle at 9:00 PM