After three adventurous teenagers decide to explore the origin of mysterious lights appearing above Phoenix, Arizona, they vanish without a trace. Twenty years later, unseen footage from that night surfaces, that chronicles the final hours of their fateful expedition. 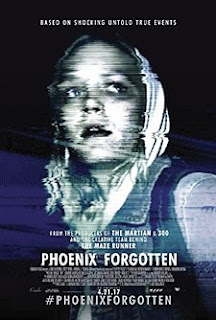 Despite all the negative reviews, I decided to see this film purely out of curiosity. The theater was empty except for my own presence, but I am still not convinced that was due to the film’s reviews.

Rather, I attribute that to the disbelief surrounding UFO’s, which may have smothered interest.
That said, I rather enjoyed it. There is no comparison intended or otherwise to the “Blair Witch Project” and its sequel, nor was it as compelling as “Cloverfield”. That’s what makes a documentary a documentary. “Phoenix Forgotten” is character and event based, purely under the control of the camera operator. To that end, it accomplished what it was supposed to.

Florence Hartigan (2013’s “Bro-Dependent” mini-series) is Sophie, the sister of Josh played by Luke-Spencer Roberts, from last year’s “ The Good Neighbor” and one of the three missing persons. The other two are Ashley played by Chelsea Lopez (2017’s “Novitiate”) and Justin Matthews (2016’s “The Interestings”) as Mark.

Sophie’s search, I felt, was as well chronicled as it was convincing. The other characters however were initially weak at times, but in all fairness after much reflection, I began to question how I would react to what they were experiencing. Therefore, accolades go to Director Justin Barber, who is no stranger to video documentaries; having numerous credits that include producer for 2008’s “Medicine for the Melancholy” and providing graphics in several “Star Trek” short documentaries. He also served as one of the writers for this film, teaming up with T.S. Nowlin, who wrote the screenplay for 2015’s “Maze Runner: The Scorch Trials”.

The plot delivered a sense of mystery that only this kind of subject matter can deliver. It obviously wasn’t produced for the action-packed factor, like other Ridley Scott productions, i.e. “Martians” and “300”. Again, this is not a bad thing.

In summary my guess is this film will be as forgotten as “Phoenix” was, only sooner rather than later. And that is too bad, because in the long run it was interesting, fast moving and with a short run time which I feel most other films should have been, that were a lot less well received.
Posted by The Windham Eagle at 2:00 AM