I chose to see this sci-fi film, hoping it would differ from those I have previously seen and reviewed - despite the fact it was inspired by “Alien” (1979). To my satisfaction it did not disappoint. But the main reason I found this film exceptional is because it resonates feasibility. It gives credence to the question of whether or not there is intelligent life on Mars and if it would prove to be unfriendly. 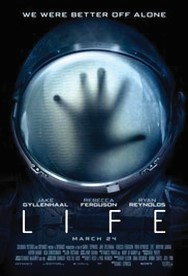 A series of events lasting roughly five minutes that led up to the film’s title being flashed across the screen was enough to capture my attention and held it there for the entire 103 minutes. It begins with the retrieval of a space probe from Mars by the ISS (International Space Station) manned by six crew members. Contained inside the probe, at least temporarily, is a sample from the red planet’s surface. What ensues is a terrifying experience from an experiment that goes horribly wrong.

Although I am not familiar with many of the actors’ names, I did find their performances compelling. Ariyon Bakare (“Rogue One”) is the first to conduct research and discover that all is not what it seems when their laboratory methods end up presenting unforeseen circumstances. His reactions both physically and mentally add to the mystery and horror of what is about to transpire
Also, among the six crew members is actor Ryan Reynolds from “Deadpool” who is one of the scientists who find his hands are full when the specimen proves to be more intelligent than originally thought. One of the two females on board, Rebecca Ferguson (“The Girl on a Train”) is now the girl on an infected and doomed spacecraft. Add to this the performance by Oscar nominee Jake Gyllenhaal and you end up with a good start to a crew that exceeds their boundaries’ as actors.

In what appears to be a “Deadpool” (2016) writer’s reunion, Rhett Reese and Paul Wernick manage to reveal personal conflict and emotion when the crew members become trapped aboard the ISS with the rapidly-growing organism. They must find out how to kill it before it manages to escape and decimate Earth.

Director Daniel Espinosa (“Child 44”) does a great job in bringing together the right combination of intense action sequences to equally compliment the crews’ personality traits. Everything seems to fit, even the surprise ending. The bottom line: “Life” is good and well worth seeing.