Movie Review: “Before I Fall” by Stephen Signor


Can you say “Groundhog Day” (1993) on steroids - with a side injection of “Mean Girls” (2014)? Seriously, the movie began just the same way. Zoey Deutch as Samantha Kingston (“Goosebumps” 2015) is one of four mean, teenage girls. She awakes every day only to discover nothing has changed. No matter what she does after realizing her fate, she wakes up at the same time, to the same tune playing on her android device - just reliving the same day over and over. 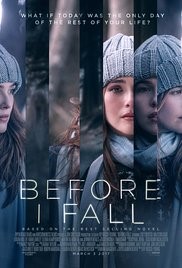 But that is where the similarities end. From having everything to having nothing happens after one fateful night. Kingston wakes up that first time and begins to question just how perfect her life really is. Trapped, she begins to untangle the mystery of a life suddenly derailed; at the same time revealing secrets of the people closest to her. She discovers the power of a single day that can make a difference, not just in her own life, but in the lives of those around her. Time is on her side but not for long.

Director Ry Russo Young (“Nobody Walks” 2012) has taken author Lauren Oliver’s first person narrative and brought the pages to life. However it is short lived. This isn’t a bad movie; it is just one that I felt could have been better. While there were four teenagers involved in the mean girl sub-plot, only two of them managed to be believable. That was, I think, due to the fact that Halston Sage and Logan Miller previously worked together in “Scouts Guide to the Zombie Apocalypse” (2015) where Sage played the older sister to Miller.

There are moments in the film that I found wasteful but - I never checked my watch so they are short. The acting was on par for the most part but as always, there are exceptions. The recipient of the bullying from the mean girls, Juliet, was portrayed by Elena Kampouris (“My Big Fat Greek Wedding 2” 2016). Although her dialog was limited, it was her delivery accompanied by precise body language that impressed. It actually made me feel sorry for her.
Well known Jennifer Beals plays Mrs. Kingston; a kind gentle soul with an abundance of understanding but very low tolerance. Unfortunately it is not enough to give the film merit. If I should wake up tomorrow and have to see this again I will be really upset.