Movie Review: Beauty and the Beast by Stephen Signor

In typical fashion Disney Productions has managed to create that magical experience we always expect. This animated classic takes us beyond the norm of this classic with a widened mythology, an all-star cast and a new form - it is a musical. It has been a long wait, as filming was completed by August 27, 2015, more than 18 months before the film's release. 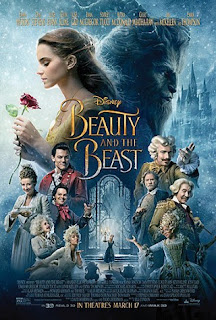 A young prince, imprisoned in the form of a beast, can be freed only by true love. What may be his only opportunity arrives, when he meets the only human girl to ever visit the castle since it was enchanted. Her name is Belle and she is convincingly played by Emma Watson - who needs no introduction. Her first appearance in a Disney film, Watson is perfect for this role. Kudos goes to Casting Director Lucy Bevan, whose credits include “Maleficent”, “The Legend of Tarzan” and “Alice through the Looking Glass”.

Dan Stevens, who starred in 2014s “The Guest”, portrays the beast. Writers Stephen Chbosky (“The Perks of Being a Wallflower”) and Evan Spiliotopoulos (“The Huntsman: Winters War”) allow this cursed beast to show his sensitive and humorous side which adds believability to his character. Couple this with the direction of Director Bill Condon, 2015s “Mr. Holmes” and what you get is a collaboration and collection of talented crew members.

Not to be shunned is the performance of Luke Evans as Gaston. His menacing, charismatic character was one you couldn’t help but love-to-hate with his impetuous, contemptuous attempts to win the love of Belle.

Alan Menken, who scored “Beauty and the Beast” (1991), returns to score this live-action adaptation, which includes new recordings of the original songs, in addition to new songs written by Menken and Tim Rice. And it all works, despite that additionally most of the characters in this remake are noticeably different in appearance than their 1991 counterparts.

Will it be successful? According to Disney, the first teaser trailer was viewed 91.8 million times in its first 24 hours. This marks the first teaser trailer of "Beauty and the Beast" to be the most viewed in history by beating the previous record by “Star Wars: The Force Awakens” (88 million views); followed by “Captain America: Civil War” (61 million views), each of them Disney films as well. This version is delightful, funny and well done - just highly entertaining on every level.