"John Wick: Chapter 2" is a new action movie and a follow up to the 2014 original, "John Wick." Chad Stahelski (Keanu Reeves’ stunt double for the Matrix trilogy) returns to direct, with Reeves once again portraying the title character. These two guys are amongst Hollywood’s best stunt workers, as clearly exemplified by the plethora of quality, entertaining, action sequences in each of these movies. The supporting cast of "Chapter 2" features Ian McShane, reprising his role as Winston, alongside some newcomers - including musical icon Common, as well as Laurence Fishburne. This film marks the first time that Keanu Reeves and Laurence Fishburne have acted together since their work on the "Matrix" trilogy. 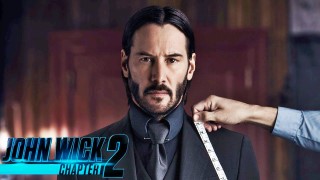 "John Wick: Chapter 2" gets off to a quick start, picking up just shortly after the events of its predecessor. Early on in the movie, John Wick returns to the criminal underworld in order to pay off a debt. Soon, he realizes that a large bounty has been placed on his head, so he must put his skills to work and defend himself. Similar to the first movie, "Chapter 2" features a rather straightforward story and has a ton of great surprises and plot twists, making it another exciting film experience.

I wouldn’t say that John Wick had it easy in the first movie, but "Chapter 2" definitely raises the stakes in a big way, making him seem more vulnerable as a character. This is just what any good action sequel should do - in order to successfully expand upon a storyline. In addition to that, this film has even better action sequences than the original, which is really quite the accomplishment.
The rest of Hollywood should take note, because the "John Wick" movies are practically a blueprint of how to succeed in a genre that has become a little sloppy over the past few years. These films understand that action movies are supposed to be fun and sometimes cheesy; they do not try to be overly dark or too grounded in reality. There haven’t been too many action films that have done this in the 21st century and that might be the best thing that the "John Wick" series has going for it. Any fan of the genre should check out "Chapter 2" in theaters. Unlike other action sequels (I’m looking at you: "Taken 2") this was just as good as the original and absolutely deserves a third installment.
Posted by The Windham Eagle at 2:00 AM