The recent release of Rogue One: A Star Wars Story marks the first spinoff movie for the most popular science fiction film franchise of all time, as well as its eighth live action installment. While it seems as if we will be getting a Star Wars movie almost every year in the near future, I figured it would be good to share how the movies stack up for me at this point in time, in order, from least favorite to favorite. Since this is a pretty debatable subject among fans especially, I am going to emphasize that this is not a definitive list of the quality of the films, but simply a ranking of my personal preference. With Episode 8 being released in December of next year, an untitled Han Solo spinoff set for 2018, Episode 9 plus another anthology film in 2019 and 2020 respectively, this is certainly an exciting time to be a Star Wars fan. Watch out for updated releases of this list in the future! 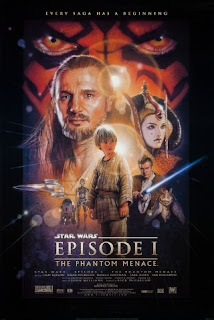 As much as I hate to start off a list like this on such a negative note, I have to say that The Phantom Menace is in a very distinct group of the absolute worst films that I have ever seen. Even as a relatively moderate Star Wars fan, I feel as if this film is an insult to the franchise. Just to point out a few flaws: Not only does Menace diminish the magic of the Force through the painful “Midi-chlorian” explanation, but it also gives us one of the most annoying characters in the history of cinema in the form of Jar-Jar Binks. Another big issue is that while it seems to be targeted towards a much younger audience, due to the overall tone, Episode I  is still incredibly bogged down by boring, cringe-worthy dialogue throughout an excessive amount of “space politics” scenes. The only redeeming quality of this movie for me is the epic lightsaber duel in which Qui-Gon Jinn (what a waste of Liam Neeson) and Obi-Wan Kenobi (Ewan McGregor) take on the incredibly underused character of Darth Maul to the tune of John Williams’ flawless Duel of the Fates.  With that being said, the first of the prequel trilogy has to be the saga’s worst effort.

Taking place ten years after the events of The Phantom Menace, I think that Attack of the Clones offers some pretty significant improvements over its lackluster predecessor. While it is far more exciting for sure, this installment still suffers from some flat-out horrible dialogue, especially in the uncomfortable, cringe-worthy attempt of a love story between Anakin Skywalker (Hayden Christensen) and Padme Amilda (Natalie Portman). Luckily, Ewan McGregor bails those two out with a pretty solid performance as Obi-Wan Kenobi; hopefully the rumors of his return to the role in his own anthology films will become a reality sometime in the near future. Anyway, Attack of Clones features a handful of pretty decent action sequences that keep the movie going, including our first time seeing Yoda wield a lightsaber in his duel against Count Dooku (the late Christopher Lee) as well as the massive arena fight scene featuring the Jedi knights. Even if seems like a video game in parts like this, thanks to extremely over the top action, this aspect at least makes Episode II  a bearable and somewhat entertaining film for the Star Wars franchise, even though it really didn’t have that much to improve on in the first place.

In my opinion, this is hands down the best effort put forth by George Lucas with his work on prequel movies. Simply put, this film actually accomplished what the entire trilogy should have done collectively: Illustrate how Anakin Skywalker transformed from an extremely powerful and gifted Jedi into the most iconic Sith lord of all time. While there are still a handful of terrible lines and some pretty mediocre acting, Revenge of the Sith really improved upon the other two prequel films in each of those aspects. I would also add that this is definitely one of the most exciting Star Wars films, even though the fight scenes are still a bit over the top, the choreography was far better this time around. With a stacked lineup of epic lightsaber duel matchups throughout the film, Revenge of the Sith is quite honestly a sort of guilty pleasure movie for me in that sense. While I still can’t say many positive things about the prequel trilogy, this particular installment has that sheer entertainment value, making it worth a re-watch on occasion. 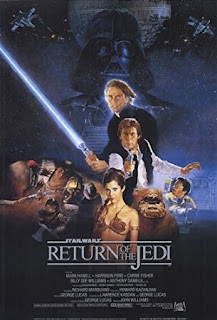 Some might find this to be a bit of a low spot for one of the more iconic Star Wars movies, but hear me out on this one. Return of the Jedi is a great movie and everything involving Luke Skywalker, Darth Vader and the Emperor is an absolutely perfect conclusion to the storyline of the original trilogy. However, there are a handful of issues that I have with other aspects of the film that earns it this placement on the list. First of all, I felt as if the whole idea of a second Death Star was just too much of a rehash of the original. I would also add that Han Solo honestly seemed a bit out of it throughout the whole film (Harrison Ford actually wanted him killed off in this movie).  Also, the death scene of Boba Fett was just far too underwhelming for one of my favorite characters in the series. Lastly, I am personally not a fan of the use of the teddy bear-like Ewoks in an epic finale like this. With all of that being said, I really do think that Return of Jedi has a lot going for it. Despite my gripes, this is still a respectable finale to one of the greatest trilogies in the history of cinema.

If I was putting together a list of the Star Wars films ranked in definitive order of pure quality, this beyond groundbreaking movie would almost certainly be higher up; but like I said, this is personal preference. If I was alive when this first came out, perhaps that would also change my opinion, but I simply enjoy the next three movies on the list a little bit more than this one. Anyway, as a film buff, it is needless to say that I highly respect the original Star Wars movie as one of the singular greatest science fiction films ever made. Every scene, character and line in this movie is iconic on one level or another. You could nit-pick some small aspects of the film, but the reality is that nobody involved in this monumental production expected this movie to be anything close to what it has become today. The classic space opera story has cemented itself in pop culture forever and I think that it is on a short list of films that will be distinctly remembered 100 years from now. There are only a handful of movies that everybody needs to see in their lifetime and Star Wars simply has to be one of them.

To be totally honestly, this first Star Wars anthology film probably would have slipped down a spot or two in these rankings if I hadn’t recently gone back for a second viewing. Initially, it took me a little while to get attached to the new characters in this movie and I also thought the build-up was a little bit slow. However, seeing it again, I really appreciated the manner in which they chose to tell this story and it genuinely fleshed out a darker, grittier side to the rebellion that we really hadn’t seen before. Even though Rogue One strays from the Skywalker-based story that fans have become accustomed to in the episodes, I give this movie a lot of credit for making it work in their own unique way and for not relying on lightsaber duels as much as the other movies do. I also must add that the CGI technology used to bring Grand Moff Tarkin back to life on the screen was stunning and it was amazing to have James Earl Jones return as the voice of the Darth Vader in two of the film’s best scenes. Finally, in my opinion, Rogue One has the best last act of a Star Wars movie and overall, should be appreciated by fans more as time goes on.

Honestly, if I were to put together a definitive list of the best films ever made, The Empire Strikes Back would be right up at the top of that too. This is widely regarded as the greatest Star Wars movie and I truly went back and forth between this and my personal favorite. However, I will say that I believe this stands alone as the best movie sequel ever; as it actually managed to improve upon its predecessor, which is perhaps the most iconic film ever made. It defined what every sequel strives to do by adding layers to the story, holding a darker tone, and introducing new characters which in this example, included cultural icons like Yoda, Boba Fett and Lando Calrissian. With all of that being said, my biggest praise for Empire is that there isn’t a single second in this film where the story loses steam at all. There are plenty of incredible action sequences but it is perfectly paced and has plenty of emotion blended into it. The end fight scene between Darth Vader and Luke Skywalker is flawless and of course, features the greatest and most well-known plot twist of all time. All in all, The Empire Strikes is the perfect middle piece of the incredible original Star Wars trilogy. 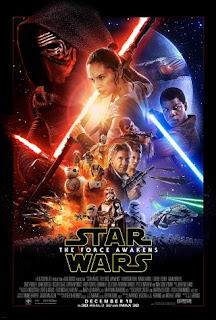 While it may not be a perfect film, The Force Awakens is one of the best experiences that I have ever had seeing a movie for the first time in the theater and it seems to get even better each time I watch it. I understand the criticism it has received for modeling itself after the 1977 original, but that honestly did not bother me and I don’t think that this new beginning would have worked nearly as well if they had altered that classic Star Wars formula. Blending a fresh new start with nostalgia, this movie is something that very few films really are to me: An experience of true, genuine, cinematic magic. Daisy Ridley, John Boyega and Adam Driver led the way in this through their incredible portrayals of the characters of Rey, Finn and Kylo Ren, respectively. I latched on to each of those three, right from the start, which made every scene in the movie just that much more special. The fact that I had so much fun with Force Awakens and fell in love with the universe because of it solidifies this movie as my personal favorite Star Wars movie.
Posted by The Windham Eagle at 2:00 AM