Patriots Day is a new film that accounts the tragic events of the Boston Marathon bombing in April of 2013. The movie is directed by Peter Berg and features native Bostonian Mark Wahlberg in the lead role. This is Berg and Wahlberg’s third collaboration as director and actor, following Lone Survivor (2013) and Deepwater Horizon (2016). The rest of the Patriots Day cast is very impressive: Featuring Kevin Bacon, John Goodman, Michelle Monaghan and Academy Award winning J.K. Simmons (Whiplash, 2014), as some of the strong supporting characters. 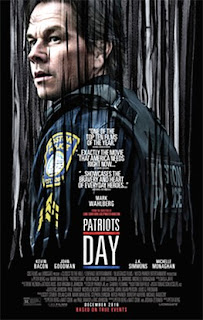 When I first heard about this movie, I thought it was a bit too early to be making a film about such a recent tragedy. Nevertheless, I just had to see if the people involved in this production could successfully pull off a quality movie that, most importantly, pays tremendous respect to the incredibly emotional source material that is still fresh in the minds of many. Luckily, in a way that is comparable to the heroic response of Bostonians, some of Hollywood’s finest pulled together and produced a movie that I consider to be a triumphant, touching tribute to Massachusetts’ capitol city.

I will keep my summary brief, as I don’t want to spoil too much about this movie. It is a film experienced best with an open mind. However, I will say that Patriots Day begins the night just before the devastating events of April 15, 2013. It goes on to depict the buildup, as well as show the actual bombings, through a blend of new footage and previous documentary and news videos. A large portion of the film then depicts all of the aftermath from this event, concluding with the arrest of the second terrorist.

Obviously, it is hard to say that I enjoyed watching this particular movie since it is such a fragile subject. However, I will still say that Patriots Day is a great film that is worth seeing for anyone that is comfortable with watching it. Everyone in the movie pays a high level of respect and professionalism to all of the people who had to experience this tragedy less than four years ago. The entire cast delivered excellent performances, especially lead actor Mark Wahlberg, in his role as Boston Police Department’s Sergeant Tommy Saunders. Overall, anyone who can handle this tearjerker should check out Patriots Day; it is a truly touching film.
Posted by The Windham Eagle at 2:00 AM