I was pleasantly surprised after being hesitant seeing this film, thinking it would be just another silly, brainless 105 minutes. From moment one, the antics of an office full of misfit, deviant and miscreant employees warns that any kind of party would be one for the ages. The catalyst for the “party” is delivered with clear imagination and the flow of the proceeding circumstances is more than plausible. I definitely could relate. Perhaps this is because the title of the movie was inspired by an SNL skit called "Office Christmas Party" and appropriately, is just as crazy. 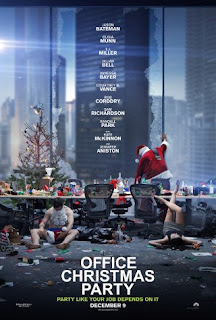 When conservative CEO Carol Vanstone (Jennifer Aniston) attempts to shut down her hard-partying brother's (T.J. Miller) branch, he and his chief technical officer (Jason Bateman) must rally their co-workers and host an epic office Christmas party in a last ditch effort to impress a potential client thereby closing a sale to secure their employment. That client, Walt Davis, is delivered by Courtney B. Vance (2015s Terminator Genesis). Although a seemingly small role Vance gives it his all, especially when the Christmas party obviously gets out of control.

Co-stars Kate McKinnon and Vanessa Bayer both cast members of Saturday Night Live, round out a unique group of talent adding to never ending hilarious situations. Of course it doesn’t hurt that the casting choices were well thought out to bring home the humor and precise delivery of dialog; that being the fifth collaboration between Bateman and Aniston, who previously starred together in The Break-Up (2006), The Switch (2010), Horrible Bosses (2011), and Horrible Bosses 2 (2014).

Writers, Timothy Dowling (This Means War), Jon Lucas (Bad Moms) and Scott Moore, who was credited for writing and directing (Bad Moms), create and bring together a myriad of personalities and numerous sub-plots that lends to the entertaining premise and conclusion of this film, while both directors Josh Gordon and Will Speck team up again, this time to provide a whole new meaning to the Christmas spirit that will leave audiences rolling in the aisles.

There is one caveat however, beware that the R rating is for language, so take that seriously. I found it well placed for emphasis but some may feel a certain four letter word overused. Otherwise, sit back and enjoy a different kind of holiday flick.
Posted by Michelle Libby at 12:38 PM