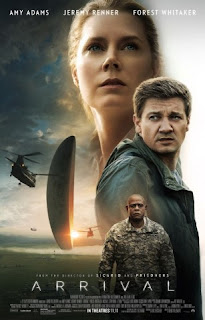 Arrival is an adaptation of a novella by Ted Chiang with the original title “Story of Your Life” with its screenplay by Eric Heisserer (2016’s Lights Out) It is a film that is going to give merit to adaptations of written science fiction that usually are without it. While to some degree I admit a preference to the actual title, I can see the correlation between the two. This came after being absorbed in the plot from the very beginning and continued long after I left the theater. There’s much more to this film than meets the eye.
When strange and mysteriously shaped spacecrafts touch down across the globe, 12 in total, a professor and linguist, Louise Banks (Amy Adams) is recruited to head a team of experts to interpret their intentions. Attached to the team is Colonel Weber (Forrest Whitaker) and Specialist Ian Donnelly (Jeremy Renner). Together they must race against time for global leaders to prevent mankind from engaging in a world confrontation that may or may not be warranted.
Adams (Batman vs. Superman: Dawn of Justice) gives credence to the prospect that not all aliens are created equal and utilizes her acting talent to render it believable, while Renner (Mission Impossible: Rogue Nation) effectively provides the catalyst for her participation. Whitaker (2015s Southpaw), the fourth African-American male to win an Academy Award for Best Actor, convincingly incorporates body language to Weber’s character that adds to the suspense of his motives.
What I really found compelling about the premise of this unique film was rather than being a test of weapon capability it was a battle of intelligence. To this end, Director Denis Villeneuve (Sicario, 2015) went above and beyond by acquiring renowned scientist and technical innovator Stephen Wolfram and son Christopher to ensure all terminology, graphics and depictions were authentic.
It’s been a long time since I saw a science fiction movie with this degree of depth and complexity. This could be a very good thing for fans of the genre that are looking for something beyond the typical. By complexity I refer to the manner in which the plot is constructed, manipulated and concluded. This film is a Rubik’s Cube of puzzling circumstances that defies logic, challenges rationale and questions the obvious. Those who enjoy thought stimulation rather than that of the senses will be rewarded.
Posted by Michelle Libby at 2:00 AM