This movie is extremely entertaining, offering a plot with a multitude of comedic situations that are interlocked through the clever use of animation. You see, Rafe has an active imagination and combined with his ability to draw, his renderings come to life. Albeit in his own mind, these manifestations are timely introduced. Accentuating the predicaments, he endlessly finds himself in trouble as a result of numerous rules bound in a book the size of a bible and Dictator Principal Dwight (Andrew Daly) to enforce them. When Dwight destroys Rafe’s sketchbook because it’s in violation of one of the rules, it’s the last straw. 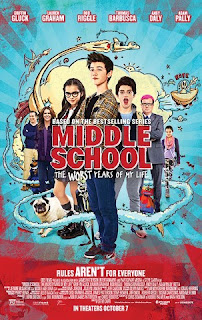 As Rafe, Griffin Gluck (Just before I Go- 2014) lends credence to the adage that middle school can be challenging, especially when you have a problem with authority. When both opposing forces collide, his sister Georgia, Alexa Nisenson (Constantine -2015) steps in to bring the balance he needs to set things right. Nisenson is brilliant portraying a little rebel, yet offering the viewer a look at being that supportive force with an added touch of sensitivity that will melt your heart.

With best friend Leo (Thomas Babusco) a plan develops to break every rule in the book. Chaos ensues from the catalyst of Rafe’s imagination, and much to the approval of classmates reduces Dwight to a frazzle.

Isabela Moner plays Jeanne, an audio visual student and overachieving girl whom Rafe can only dream about. Their chemistry is precisely presented with what would be expected for that age group. The dialog is fluid as well as the actions.

Meanwhile, at home, Rafe’s mother’s boyfriend considers Rafe an obstacle, a threat and most of all a loser. Rob Riggle (My Big Fat Greek Wedding 2 -2016) is Bear, that boyfriend. His character is one you love to hate and I had no difficulty with this.

The rest of the cast filled in any gaps leaving me with the feeling of being there and restoring my own memories of those years. After all, isn’t that what a good film is supposed to do?

Director Steve Carr, his first direction since his 2012’s Movie 43 manages to keep the tumultuous situations going without missing a beat. Chris Bowman writer of Napoleon Dynamite and most recently Masterminds teamed up with Hubbel Palmer, who is also credited in Masterminds, to complete the era teleportation.
Posted by Michelle Libby at 2:00 AM