Movie review - Keeping Up with the Joneses - review by Stephen Signor

I have good news and bad news. The bad news is there is no good news. This film is a prime example that you cannot trust trailers that are shown for promotional purposes. It begins with a house explosion that while spectacular is nothing more than a tease. Granted this is not billed as an action film, but the fact that there were a few wild scenes peppered in left me wondering why director Greg Mottola was expanding his horizons from directing and producing TV movies and series. Clearly it was a mistake. 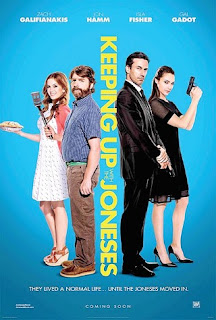 When a suburban couple becomes embroiled in an international espionage plot they discover that their seemingly perfect new neighbors are government spies. While I did find the premise interesting to a point, I felt the presentation lacked in believability. Sudden scene changes left me feeling dizzy and unable to follow. Writer/producer Michael LeSieur form the TV Series Glory Days appears to lose focus on where the plot should go and when. What you end up with is scenes that are placed almost randomly.

Zach Galifianakis plays Jeff Gaffney, a very ordinary non-achieving husband loved by his understanding and but mundane wife Karen played by Isla Fisher (The Brothers Grimsby). The chemistry that ensues was obviously born by a mad scientist, as the banter seems to be thrown together like a puzzle where the pieces don’t fit. I blame this on the casting of Galifianakis. His memorable humor displayed in (Hangover 1 and 2) was too much for this caliber of film. I found it awkward here.

If there was any positive point, it had to be the portrayal of the neighborhood spies and their introduction into the plot. As Darrell, Jon Hamm brings the well played demeanor of Tim Jones. His voluptuous but deadly wife Natalie (Batman v Superman: Dawn of Justice) reprises the similar role she played as Diana Prince / Wonder Woman. This I thought at least gave the action merit.

Lastly there was the ending which I will admit I enjoyed, but didn’t happen soon enough. When the Joneses identity is also discovered by foreign powers, through a twist of fate, they team up with the Gaffney’s and wild action scenes involving chases, bullets flying and explosions ensue. What follows however is stereotypical and therefore predictable.

This was the longest 105 minutes I have spent in a theater.
Posted by Michelle Libby at 2:00 AM