The word is out that this production is Bourne like. Well, forget about what is being said, sit back and enjoy the ride. While there are some similarities, including at one point, when Ben Affleck said, “we should go,” it really ends there. Unlike Bourne, the action sequences are not as frequent. However, that works for the plot here. What action there was, I considered just as intense in comparison. As for Affleck’s character being autistic I felt it had no bearing on the plot other than an explanation for his special abilities. It would have worked just as well without it. 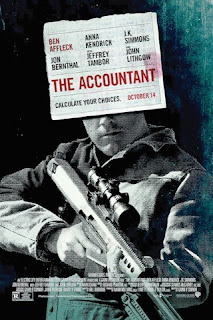 The cast does include two Oscar winners: Ben Affleck and J.K. Simmons; and two Oscar nominees: Anna Kendrick and John Lithgow. Affleck is Christian Wolff, a mathematic scholar who prefers numbers rather than people. No one seems to know who he is, except for being a high profile freelance accountant. His major clients are less than law abiding and as expected eventually draws the attention of the Treasury Department's Crime Enforcement Division headed up by Ray King (J.K.Simmons). Probably most recognized from his Farmers Insurance commercials, I kept waiting for him to say “we covered it.” In a way he did. I thought his brash character set the right tone for moving things along.
Portland, Maine, born Anna Kendrick, who was impressive as Cinderella in 2015s Into the Woods, adds a bit of mystery to the mix. Interestingly, Kendrick based her character on her mother, a real accountant who went over the script, explaining the math to her. Her film relationship with Affleck is professional as is the interpretation of her character.

The plot, while slow moving at times, does thicken when a legitimate client (John Lithgow) enlists the help of Affleck to straighten out discrepancies’  involving millions of dollars in the books of Lithgow’s high tech robotics company. In doing so, related and unrelated secrets are uncovered and bodies begin to pile up.

Director Gavin O’Connor (Jane Got a Gun-2016) did well in getting the gist of the plot across although it could have been achieved with less flash back. Writer Bill Dubuque, who wrote the screenplay for 2016s A Headhunters Calling managed to keep me interested in The Assassin, but not on the edge of my seat; something I expected from this caliber of players and story line.
Posted by Michelle Libby at 2:00 AM